Canine Parvovirus has two types. This article addresses only type-II. Canine parvovirus causes disease in animals, but not humans. Parvovirus B19, which causes various diseases in humans, is a member of the Erythrovirus genus of Parvoviridae rather than Parvovirus.

CPV-2 is a highly contagious virus affecting members of the family Canidae. Members would include domestic dogs, coyotes, wolves, and foxes. The virus is spread through direct or indirect contact with infected feces. Possible reservoirs for CPV-2 would include be shoes, paws, cages/carriers, and even soil. The virus can lie dormant on the ground for long periods of time (1+ years). It is resistant to much environmental conditions such as low pH and high temperatures. 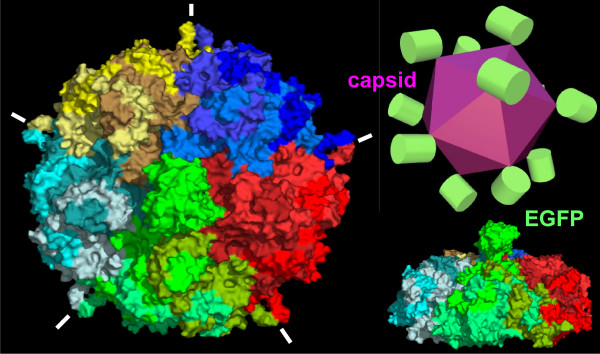 The genome of a canine parvovirus isolate strain (CPV-N) is 5,323 nucleotides in length. The terminal repeat at the 3' end of the genome shared similar structural characteristics but limited homology with the rodent parvoviruses. The 5' terminal repeat was not detected in any of the clones. Instead, a region of DNA starting near the capsid gene stop codon and extending 248 base pairs into the coding region had been duplicated and inserted 75 base pairs downstream from the poly(A) addition site. Consensus sequences for the 5' donor and 3' acceptor sites as well as promotors and poly(A) addition sites were identified and compared with the available information on related parvoviruses. The genomic organization of CPV-N is similar to that of feline parvovirus (FPV) in that there are two major open reading frames (668 and 722 amino acids) in the plus strand (mRNA polarity). Both coding domains are in the same frame, and no significant open reading frames were apparent in any of the other frames of both minus and plus DNA strands. The nucleotide and amino acid homologies of the capsid genes between CPV-N and FPV were 98 and 99%, respectively. In contrast, the nucleotide and amino acid homologies of the capsid genes for CPV-N and CPV-b (S. Rhode III, J. Virol. 54:630-633, 1985) were 95 and 98%, respectively. These results indicate that very few nucleotide or amino acid changes differentiate the antigenic and host range specificity of FPV and CPV.[1] 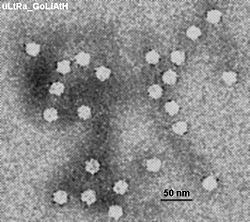 Infectious virions of canine parvovirus contain 60 protein subunits that are predominantly VP-2. The central structural motif of VP-2 has the same topology (an eight-stranded antiparallel beta barrel) as has been found in many other icosahedral viruses but represents only about one-third of the capsid protein. There is a 22 angstrom (A) long protrusion on the threefold axes, a 15 A deep canyon circulating about each of the five cylindrical structures at the fivefold axes, and a 15 A deep depression at the twofold axes. By analogy with rhinoviruses, the canyon may be the site of receptor attachment. Residues related to the antigenic properties of the virus are found on the threefold protrusions. Some of the amino termini of VP-2 run to the exterior in full but not empty virions, which is consistent with the observation that some VP-2 polypeptides in full particles can be cleaved by trypsin. Eleven nucleotides are seen in each of 60 symmetry-related pockets on the interior surface of the capsid and together account for 13 percent of the genome.

CPV results in two forms of infection: intestinal and cardiac. Puppies 6 to 16 weeks are most susceptible to CPV. Most cases involves puppies under the age of 6 months, with the most severe cases seen in puppies under the age of 12 weeks. The severity of the disease is worse with factors such as stress, concurrent infections, and poor hygiene. Certain breeds, such as Rottweilers, Doberman Pinchers, English Springer Spaniels, and black and tan colored dogs may be more susceptible to CPV. CPV sheds into the stool in 3-4 days after infection, for a period of 2-3 weeks.

The intestinal form is also known as enteritis. CPV infects rapidly dividing cells in the intestine, bone marrow, and lymphatic tissues. CPV results in necrosis (cell death) of the intestinal crypts, leading to massive blood and protein loss. White blood cell count is reduced; both lymphocytes and neutrophils are affected (these are types of white blood cells).

The second form of CPV is the cardiac form. It is rare and usually only affects puppies to up 8 weeks of age. This form of CPV attacks the heart of the puppy and causes difficulty in breathing. The puppy often dies suddenly or after a brief period of breathing difficulty.

The cardiac form will not produce similar symptoms as the intestinal form. Since it attacks the heart muscle, a major sign is difficulty in breathing.

There is no specific anitiviral treatment for CPV. Treatment must be administered early on to ensure successful recovery. Rehydration is the first step of treatment. Healing and defense require that we promote a proper blood flow to all tissues. The rate of fluid replacement is tailored to the amount of fluid losses from vomiting and diarrhea. Dextrose and potassium chloride are frequently added to the fluids to encourage increased vascular volume and to replenish total body potassium depletion. Antibiotics are also administered to help with the low white blood cell count. Whole bllod transfusions may be required in cases of severe bloody diarrhea. It is important to know that even with hospitalization, there is no guarantee that the dog will survive.

Vaccination is vital to ensure the health of the dog from this virulent disease. Newborn puppies receives their immunity from their mother’s first milk, the colostrum, on the first day of life. This special milk contains the mother’s antibodies against CPV and until these antibodies wane to ineffective levels, they will protect the puppy. Puppies at 8 weeks of age should receive an initial modified dosage of CPV vaccine from a licenced veterinarian, followed by 2 more shots of the modified vaccine until the puppy is around the age of 16 weeks. It is recommended that dogs should receive CPV vaccines annually.