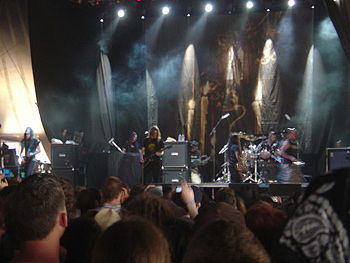 Opeth is a heavy metal band from Sweden that formed in Stockholm in 1990.

Their music combines elements from Scandinavian death metal (growling vocals, fast tempo) and progressive rock (syncopation, unusual time signature). They are also known for adding a variety of non-metal elements to their music and are influenced by diverse musical styles, including jazz, 1970s progressive rock, folk, and blues. Opeth are often classified separately from regular death metal acts due to their unique blend of melodic and progressive elements. Lead vocalist Mikael Åkerfeldt has also been noted for his singing, which utilizes both growling and clean vocals.

Opeth was formed in 1990 in Stockholm, Sweden by David Isberg. Isberg asked former Eruption member Mikael Åkerfeldt to join the band as a bass player in a practice session. Isberg failed to inform the current bass player or any other members of the band. All other members of the band except for Isberg quit for this reason and Åkerfeldt joined the band after his former band Eruption had ended. With Åkerfeldt (on guitar) and Isberg (on vocals), the band was soon joined by former Eruption drummer Anders Nordin and bassist Nick Döring. Andreas Dimeo also joined as a second guitarist.

This line-up lasted only a year after Döring and Dimeo quit after the band's first performance. Guitarist Kim Pettersson and bassist Johan DeFarfalla joined the group for the band's second performance. DeFarfalla left after the second performance to spend time with his girlfriend in Germany. DeFarfalla was replaced with bassist Peter Lindgren. Lindgren returned to his original instrument, guitar, when Pettersson left. Isberg left the band in 1992 due to creative differences. Åkerfeldt, having had previous experience as vocalist for his former band Eruption, became the band's new lead vocalist. They played as a three-piece for more than a year before they found a new bass player, Stefan Guteklint. Opeth had signed its first record deal in 1994 with Candlelight Records and Guteklint was dismissed by the band soon after.

Candlelight Records was impressed by Opeth's originality. An Opeth live set would commonly go in many different musical directions and the average song lasted no less than ten minutes. Candlelight Records released their debut full-length album, titled Orchid, in 1995. In 1996 Dan Swanö of Edge of Sanity produced their second album Morningrise. Opeth embarked on a short tour with death metal band Morbid Angel shortly after. Century Media Records took notice of Opeth and licensed their first two albums in the United States and planned on releasing their upcoming third album in both Europe and the US.

Their next album, entitled My Arms, Your Hearse, introduced a new change in style for Opeth. This album changed Opeth's focus to more progressive metal riffs instead of guitar harmonies. The band's lineup would change with this new album as well. Bassist Martin Mendez was recruited to replace DaFarfalla and drummer Martin Lopez, of Amon Amarth, was recruited to replace Nordin. My Arms, Your Hearse was released in 1998 to much critical praise. This album broke Opeth into the mainstream and established them as a leading force in progressive and death metal.