Obama[1] (小浜市 Obama-shi[2]) is a city in Fukui prefecture, Japan, famous for its historical connections to China and for sharing its name with a U.S. president.

Obama has a population of about 34,000.[3] Its location on the northern coast of Honshu, Japan's largest island, has meant that the city and surrounding regions developed deeper cultural links to China than other areas of Japan. Interesting examples of culture include many temples and the 1,200-year-old o-mizu okuri (お水送り 'water-sending ceremony'), a Shinto ritual in which a priest from Jingu temple (神宮寺 Jingu-ji) pours water into the rapids at Unose (鵜の瀬). The water is believed to reach Nara (奈良), Japan's capital in ancient times, ten days later. Nara holds a 'water-drawing ceremony' (お水取り o-mizu tori) to mark the occasion. 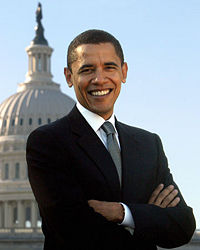 (PD) Photo: U.S. Senate
Barack Obama appears popular in the Japanese city of the same name, though most citizens are ineligible to vote in U.S. elections.

The coincidence of the city's name and that of U.S. President Barack Obama has led to welcome publicity for the city. The mayor sent Obama a gift including a pair of lacquered chopsticks when he was running for office in 2008; Obama responded with a letter of thanks, noting that they shared not just a name, but common responsibilities. The city made several items of merchandise available, including Barack Obama T-shirts, for citizens to support the Obama's bid for the White House.[4][5][6]