The nose is the portion of the airway preferentially used for inhalation, and contains sense receptors for the sense of smell (olfaction).

In humans, the nose is located centrally on the face; in other mammals, and in reptiles and amphibians, it is on the upper tip of the snout.

The word "nose" derives from the Latin nasus, which referred to the human nose or animal snout. The term is non-specific, and encompasses concepts including the external structure of the human face, the olfactory organ, part of the airway, and part of the immune system.

The nose acts an interface between air within the body's respiratory passages and the atmosphere of the external world. The nose and associated structures (the paranasal sinuses) are concerned with conditioning the entering air (for instance, by warming and/or humidifying it) and sometimes with reclaiming moisture from the air before it is exhaled (as occurs most efficiently in camels). The nose also acts as a trap for noxious particles and germs (bacteria and viruses) that enter the body by being inhaled. Because of this, the nose contains immune system components that actively fight infections.

Newborn human babies breathe only through the nose, and are called therefore called "obligate nasal breathers". Crying newborns are sometimes able to breathe in through the mouth, and by several months of age, all normal infants are able to use both the nose and mouth for breathing. Many adults are mouth-breathers. Preferential inhalation through the mouth generally is either a learned habit, or performed because nasal obstruction resists airflow.

In humans, like most mammals, the nose is the primary organ for smelling. As the air is sniffed, it flows in through the nose and over structures called turbinates in the nasal cavity. These turbinates are shaped very much like the whorled shells of mollusks such as the conch, hence they are also known as nasal conchae. The turbinates slow the air flow and direct it toward the olfactory epithelium. At the surface of the olfactory epithelium, substances carried by the air contact olfactory receptor neurons. When these substances are of a type that the human olfactory system recognizes, the neurons fire and send impulses to the brain. For further information, see sense of smell and olfaction.

In cetaceans, the nose has been reduced to the nostrils, which have migrated to the top of the head, producing a more streamlined body shape and the ability to breathe while the body is almost entirely submerged. Conversely, the elephant's nose has become elaborated into a long, muscular, manipulative organ called the "trunk". 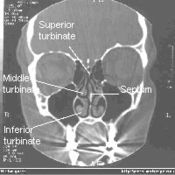 The human nose is comprised of bony, cartilagenous, and epithelial (mucosal membrane) components. 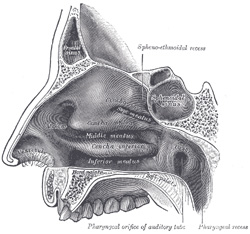 Medical conditions of the nose

Some people choose to get rhinoplasty to change the aesthetic appearance of their nose. Nose piercings are also common, such as nostril, septum or bridge piercings.

In New Zealand, nose pressing (hongi) is a traditional greeting.

Classification schemes for linking characteristic nasal shapes with ethnic or racial categories have been promoted for hundreds of years. For example, a tract known as "Nasology", written by Eden Warwick (pseudonym of George Jabet), was extant in 1848. 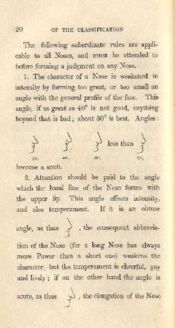 This study of nasal shapes was expanded with efforts to classify humans into racial categories, for example, by Nazi Germany in the 1930s and 1940s. Books on display at the National Holocaust Museum in Washington, D.C., USA, depict Nazi categories of nasal shapes of Jews and other ethnic groups.

Nasology is not a medically recognized field of study (it has no entry in the NCBI MeSH thesaurus), creates no scientifically-testable hypothesis, and as such is of historical interest only.

The nose and the voice