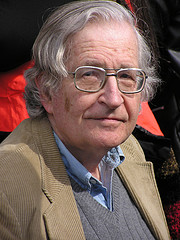 Noam Chomsky (born December 27th, 1928) is an American linguist and political theorist as well as a professor emeritus at the Massachusetts Institute of Technology.

His most famous accomplishment in linguistics is the theory of generative grammar, which he established in his 1957 book Syntactic Structures. His theory formed the basis of the school of generative linguistics.

In politics, he is known for his libertarian socialist and anarchist ideologies and his opposition to United States foreign policy and big corporations.

Chomsky's work has been highly influential both within and outside linguistics. He has been at the fore of many theoretical breakthroughs for over fifty years, so much so that writing a summary of his work is much like writing a history of linguistics for the period. His work is characterized by a mentalist, 'universalist' approach to language.

In 1957 he published a scathing review of B.F. Skinner's behaviorist model of language, in which he argued that human language is best understood as a system that exists separately from experience. Although Chomsky was vague on the actual mental origins of language, his position has since been articulated that if language cannot be adequately understood as being derived wholesale from experience, then at least some of it must be innate, and hence specific to and universal for humans. Nativism, universality and to a lesser extent human specificity have been the framing issues for much linguistic research up to the present day with nearly all discussion contentiously revolving around the postulation/validity of linguistic universals and the extent to which experience plays a role in language. Outside of linguistics, Chomsky's attack on Skinner is often credited with sparking the cognitive revolution in psychology and spawning the new sub-discipline of psycholinguistics.

Chomsky's other programmatic publication from 1957 was Syntactic Structures, in which he opened the door to a precise study of grammar as a symbolic system of knowledge. This led to the other major concern of modern linguistics, the modeling of grammar and especially syntax. The stances Chomsky took on language provoked interest from the philosophical community (see rationalism), and have also proved fundamental to computer science.

Syntactic Structures defines a language to be an infinite collection of sentences that is generated by a finite set of rules from finite lexical items. Crucially, these sentences, rules and lexical items are fundamentally mental entities, that is, a part of a native speaker's competence. Competence as a mental construction is contrasted with performance, which Chomsky defines as language as it is used by people. A model of competence has traditionally been the defining goal within Chomskyan linguistics since it is mental, and thus likely to be innate and universal. Furthermore, this reified system may be more precisely modeled as a linguistic system than performance, which is seen as error ridden and subject to non-linguistic variables. While many linguists have adopted this stance, there is substantial debate on the utility and veracity of these positions.

In 1965 Chomsky published Aspects of the Theory of Syntax, which was an extension and revision of Structures. In it, grammar was hypothesized to consist of a linear progression between discrete modules, beginning with semantic representation, which resulted in a syntactic structure called "Deep Structure". Once a grammar arrived at a Deep Structure, the transformational component of the grammar applied to the structure. Upon reaching the end of transformations, the grammar had a "Surface Structure", which was shipped off to the phonological component and eventually to the muscle system to be uttered/signed. This model of language was later termed the "Standard Theory" during the generative semantics controversy. Aspects thus hypothesized that the sentence "The dog bit the cat" was the Deep Structure for a sentence like "The cat was bitten by the dog", where an optional transformation called "passive" had applied. Passive stipulated that the Deep Structure object noun phrase be moved to the subject position, inserted the passive auxiliary, and optionally placed the Deep Structure subject into a "by-phrase".

Chomsky continued to revise and expand his work, and by the late 1970's was working in a framework dubbed the "Revised Extended Standard Theory" in order to differentiate it from the prior "Extended Standard Theory". These theories were characterized by the addition of interpretive semantic and lexical rules as distinct from syntactic transformations. This can be seen as a continuation of the trend (eloquently depicted in John "Haj" Ross 1967 dissertation) to reduce the descriptive power of transformations, constructs that had long been seen as overly powerful for describing human language. After all, one can easily write a transformation that reorders every doublet of words in a sentence so that "The quick brown fox jumped over the lazy dog" would come out like "Quick the fox brown over jumped lazy the dog". However, no natural language does that, so our theory of language should not be able to ascribe such power to a speaker's competence.

By 1976 Chomsky had moved to unify many distinct transformations under one umbrella, culminating in 1980 in the postulation that there was only one transformational mechanism available to natural language: "move-α". This marked the beginning of the Government and Binding model, so called because it provided insights into variable binding phenomena and a syntactic relation called government.

In 1993, Government and Binding was scrapped for the Minimalist Program, which is the theory currently used by Chomsky. Deep structures were eliminated in favor of iterative hierarchy building mechanisms (yielding Bare Phrase Structure) and a few other operations. With this, much Chomskyan linguistics now focuses on developing theories of interfaces between grammatical components like syntax and phonology, or syntax and semantics.

Chomsky is not solely occupied with studying syntax, and in 1968 he published The Sound Pattern of English with Morris Halle. In it, they developed a theory of phonology that transformed abstract 'features' such as [+/- voice] from one to another not unlike syntactic transformations, without relying on the concept of phonemes. Although Chomsky subsequently left generative phonology to others, the fundamentals set out in SPE continue to influence the field to this day. Especially since the 1980s and 1990s, Chomsky has also contributed to the debate over language evolution.

Chomsky claims not to have a theory, but Alison Edgley suggests he does have one, which derives from his model of social control. [1]