A member agency of the United States intelligence community (IC) and administratively a part of the United States Department of Defense, the National Reconnaissance Office (NRO) is responsible for the design, procurement, launch, and operation of U.S. airborne reconnaissance platforms, including satellites, as well as some unmanned aerial vehicles (UAV) and reconnaissance aircraft. NRO receives the raw output from these platforms, but the output is analyzed by other members of the IC, principally:

Launch and some operational control of the satellites is under the Fourteenth Air Force, which runs the military components of the Eastern (Cape Canaveral) and Western (Vandenberg Air Force Base) launch ranges, as well as downlinks at locations such as Buckley Air Force Base outside Denver, Colorado, and Alice Springs in Australia. Area 57 in Virginia may be a redistribution point rather than a direct downlink.

After the May 1960 shootdown of a U-2 reconnaissance aircraft over the Soviet Union, a program which, under the code name AQUATONE, had provided immensely valuable imagery intelligence, the United States was concerned about the vulnerability of even high-altitude reconnaissance aircraft such as the U-2. As early as 1946, there had been studies of reconnaissance satellites, and an Air Force requirement was issued in 1955, before the first launch of any type of satellite, the Soviet Sputnik, in 1957.

After delays in an Air Force program, the Central Intelligence Agency was authorized, in 1958, to develop the first photoreconnaissance satellite, the CORONA satellite. Launched in 1960, the first working intelligence satellite was a Navy program, with an overt scientific mission for the GRAB satellite, but that carried, as well, an electronic intelligence payload, Tattletale. Also in 1960, also under an overt scientific mission for the Air Force called the DISCOVERER satellite, the actual payload was CORONA, which took pictures of large areas but without fine detail. President Dwight D. Eisenhower, also in 1960, authorized the Air Force to begin developing the high-resolution GAMBIT satellite. [2] Each of the programs was run by the sponsoring organization, the CIA, Air Force, or Navy, with the only cooperation in use of military space launch facilities.

There were significant technical problems in these CIA and Air Force programs, as well as another Air Force program for the SAMOS satellite. SAMOS had not yet been launched. While an initial White House review assigned the latter project to a subcabinet-level Air Force organization, by 1961, the National Reconnaissance Program (NRP) was being proposed, with the very phrase NRP being classified as TOP SECRET. On 20 July 1961, the NRO was established by a classified directive; the name NRO was classified SECRET. [3] NRO was to be jointly managed by the Air Force and CIA, with Joseph Charyk, with the overt title of Under Secretary of the Air Force, to be its first Director.

The National Photointerpretation Center (NPIC), a separate organization, under the CIA Directorate of Science and Technology but with substantial military staff, analyzed the output of reconnaissance photographs, both from satellites and the U-2. NPIC was headed by Art Lundahl, often regarded as the father of U.S. photointerpretation. NPIC was not part of NRO, but of CIA. Eventually, NPIC was transferred to the short-lived National Imagery and Mapping Agency, which became the National Geospatial-Intelligence Agency (NGA).

Disclosure of the existence of NRO was not seriously discussed until 1992, although the general existence of the programs were not acknowledged, but widely known among defense personnel and contractors, by the late 1960s. Nevertheless, full announcement of the agency took place in 1994, with most details still highly classified. NRO's launch and operations were sensitive compartmented information (SCI, a extra control beyond the regular clasification of intelligence), and in the BYEMAN compartmented control system. The images and their interpretation, however, were under a separate SCI codeword, TALENT-KEYHOLE control system.

For many years, the NRO kept the prior programs in separate organizational units:[3] 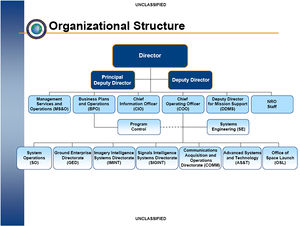 There were NRO staff for aircraft and space platforms. Eventually, a Program D covered aircraft systems such as the U-2 and SR-71.

The service-specific program, with little information sharing, is an endemic problem in intelligence, called stovepiping.

There were fine-grained technical distinctions, but based on function, not sponsor. For example, the NRO Strategic Plan breaks SIGINT into COMINT, tactical ELINT, and national ELINT. [4]

The "fact of" U.S. reconnaissance satellites was a matter of extreme sensitivity, even after the Soviets were made aware of it as part of arms control negotiations. [The] "Soviet Union could be particularly disturbed by public recognition of this capability [satellite photography]...which it has veiled."[5].

There was considerably more sensitivity to admitting even to "the fact of" US satellite SIGINT [6]. The US decided to admit to using satellites for SIGINT and MASINT in 1996. [7].

US programs are most commonly known by a designation in the numbered KH (for KEYHOLE) series. The code words for the active and recent satellites are tightly held.

CORONA KH-4 satellites and their product have been fully declassified. Some information has been discussed about KH-8 GAMBIT and KH-9 HEXAGON, whose CIA development, along with early work on the KH-11 KENNAN, was under Albert Wheelon.

The latest generation has been called either KH-12 or Advanced KH-11 or Advanced CRYSTAL.

Four geosynchronous orbit RHYOLITE satellites were launched in the seventies, with COMINT and TELINT missions. After having the name compromised when Christopher Boyce sold information to the Soviets, the code name was changed to AQUACADE.

In the late seventies, another class of geosynchronous orbit SIGINT satellites, first called CHALET and renamed VORTEX after the code name was compromised. After the loss of Iranian monitoring stations, these satellites were also given a TELINT capability.

MAGNUM geosynchronous SIGINT satellites were first launched from the Space Shuttle in 1985. These were believed to be more sensitive and perhaps stealthier than RHYOLITE/AQUACADE.[9]

There are competing views on the nature of the next generations of intelligence satellites. All major participants agree that satellites need to be smaller and cheaper, and that more of them need to be in orbit. It remains controversial, however, just how small they should be.

Stealth technology, variously codenamed MISTY, ZIRCONIC, or NEBULA, is extremely expensive, and has been ruled out of the next generations; there is a sense that it was a solution looking for a problem that might or might not exist.

At the urging of Rep. Larry Combest (R-TX) during his tenure (1995-97) as chairman of the House Permanent Select Committee on Intelligence, a panel convened to investigate the possibility of reducing the size and cost of reconnaissance satellites. [10] Reducing size of the satellites themselves would reduce the cost of launching as well. Lower overall cost would, in turn, give the opportunity to have more payloads in orbit or that could quickly be orbited, increasing flexibility of deployment. While a KH-11 is an immensely sophisticated platform, it can only be over one area at a time. France has been experimenting with ELINT "microsatellites", their current generation being the Essaim "swarm".

The panel found that the IMINT Directorate saw no major problems in eventually migrating to the a platform about half the size of current IMINT satellites. Reductions to 20-25% of current size were proposed by the Office of Special Applications and regarded highly by the panel. The panel's report emphasized that cost was not the only reason for their support of a greater number of smaller satellites; they spoke of the risk presented by the loss of a large satellite in the current, or even half-sized, generation. While the panel did not see commercial IMINT as a viable alternative to the government systems, it did see commercial imagery as an increasingly valuable complement.

The subsequent Jeremiah Panel, under ADM (ret.) David Jeremiah, assessed the NRO for the 21st Century, [11] made a number of observations. While it held that the existing DoD-CIA control of NRO continued to be the best choice, there had been an overemphasis on national-level objectives, and support to military operations needed to improve. There was a strong recommendation that the advanced R&D capability needed to be a prime mission, possibly in a unit with much greater secrecy than that of the production systems.

In 1997, NRO proposed the Future Imagery Architecture (FIA). [12] FIA continued the emphasis on small satellites, but apparently not microsatellites. FIA included both electro-optical (i.e., photographic) and radar imaging technology. The electro-optical technology would operate, at least, in the visual and infrared bands.

This was to be the most expensive program in the history of U.S. intelligence, and Congress imposed budget caps in 1998 and 1999. Even in the early proposals, the FIA moved the next generation of imagery satellites was to 2004 or 2005, a year later than planned. Still, in mid-1998, NRO proposed an evolution to 3-4 new IMINT satellites, rather than a revolutionary constellation of 10-12.

Boeing, a respected aerospace contractor with little intelligence satellite experience, won the FIA prime contract. There were numerous reports of delays and budget overruns, and, in September 2005, that Boeing would be replaced in building the electro-optical IMINT portion, by Lockheed Martin. Lockheed Martin, experienced in this area, agreed to build an interim IMINT platform from spare parts of the current generation. Boeing would remain prime contractor, and develop the imaging radar satellite, seen as less complex.

NRO was expected to solicit responses, in 2008, for a proposal for the true new generation, replacing FIA with a system called BASIC. BASIC was described as less ambitious than FIA, to be available in 2011, and cost between $2 and 4 billion. Boeing's target would be to build what was termed Space Radar, rather than the more complex Space Based Radar.