Imagery intelligence (IMINT) is a means of obtaining information about distant topics by creating an image of it, most often using visible light photography. Imagery interpreters are people skilled in understanding the significance of images, such as high-altitude photographs of camouflaged military installations. They may use quantitative techniques of photogrammetry, as well as a highly trained ability to recognize patterns. It is a subset of geospatial intelligence, which matches the images to precise geographic positions. 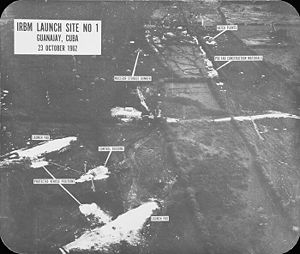 Imaging sensors, as a first approximation, break into "mapping" (or "wide-view") and "close-look" types. Accurate maps are indeed a product of imagery intelligence, as well as geodesy. Wide-view imaging, coupled with spectroscopic MASINT, can give significant economic intelligence relating to the state of agriculture, disasters, and natural resources. Close-look techniques can identify specific patterns and individual objects; a Soviet S-75 Dvina installation, for example, had a characteristic six-pointed star pattern even if the missiles and radars could not be seen in detail. Of course, given a clue that a given missile radar system might be in a certain place, electronic intelligence can be tasked to confirm by detecting the radars of that system.

Given a precisely located image, the full range of intelligence collection technologies can cooperate to understand its significance. Spectroscopic MASINT, for example, does not create new images, but analyzes the infrared and visible spectra of the pixels of the image. Multispectral analysis of those pixels can reveal, for example, if a field, grass-green to the human eye, is actually vegetation or camouflage paint. Signals intelligence can determine if communications or radar signals are coming from a seemingly innocent building.

The image-forming devices are most often on reconnaissance aircraft or satellites, but can come from handheld cameras on the ground, photographs taken through a submarine's periscope, or many other potential platforms. Imagery intelligence definitely includes photographs taken in the infrared or ultraviolet spectra.

Electro-optical imaging is a superset of photography in the visual and infrared spectra, using precise cueing to direct the cameras, correlating them with precise time and geographic references.

Imagery platforms carry the sensors. Most commonly, they are unmanned aerial vehicles, manned aircraft or reconnaissance satellites, although long-range cameras from ground stations or ships may capture imagery.

Interfering with imagery intelligence includes making it hard for an adversary to see real things of interest, or making it easy to see false but convincing things.

Camouflage, such as painting an object to blend into its background, or perhaps covering it with branches and brush is an old technique. Spectroscopic MASINT is one complementary technique that, for example, can analyze what a human imagery interpreter sees as green, and tell if the green is from chlorophyll of real plants or from paint pigments. 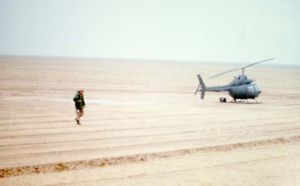 Deception of imaging goes back to the earliest history of conflict, where the presence of an army was simulated with many campfires, maintained by a few firetenders rather than the large implied force.

Modern militaries routinely deploy inflatable visual decoys, which may be quite sophisticated in fooling multiple sources. An inflatable main battle tank may be made of plastic covered with a thin metal film (e.g., aluminized Mylar) so that it appears to be metal on imaging radar. Decoys may include heat sources, so that thermal imaging of that "tank" suggests its engine is shut off, but still cooling down.

IMINT will produce large numbers of individual photographs, which, when correlated with geospatial information, forms a mosaic. Interpretation is done both on the individual images and the mosaic.

"Information that identifies the geographic location and characteristics of natural or constructed features and boundaries on the Earth, including: statistical data and information derived from, among other things, remote sensing, mapping, and surveying technologies; and mapping, charting, geodetic data and related products." [1]

An example of the synergy among collection disciplins is "imagery-defined MASINT (IDM)". In IDM for materials MASINT, a MASINT application would measure an image obtained through imagery intelligence methods, pixel by pixel, and try to identify the physical materials, or types of energy, that are responsible for measurements produced pixels or groups of pixels, and if they differ from known signatures. When the signatures are then correlated to precise geography, or details of an object, the combined information becomes something greater than the whole of its IMINT and MASINT parts.

A very early use of this method was to determine if apparently green areas in reconnaissance photographs were consistent with live vegetation, cut and dying vegetation, or green camouflage pigments}}

For many years, U.S. imagery intelligence taken by other than tactical systems were under the TALENT-KEYHOLE (TK) compartmented control system. TALENT applied to airborne and KEYHOLE to satellite systems, but the product was so commingled that separation made little sense. While the Soviets knew about U-2 Dragon Lady aircraft photography almost from the first flight over their homeland, they did not, at first, know about satellite imagery and special sensitivity was warranted.

Later, "the fact of" satellite imagery was kept highly classified due to Soviet sensitivities. [2] They considered it politically unacceptable to have "spy satellites over the Motherland", and the great Red Army unable to do anything about them. Soviet delegations threatened, apparently seriously, to walk out of arms control conferences if the information was made public.

Operational military commanders grew more and more upset that combat aircrews, who rarely had TOP SECRET/TK clearances, could not see pictures of the targets they were going to attack. Most imagery useful at the tactical level is now at the SECRET "collateral" (i.e., not in a compartment) level. For photographs of special sensitivity, especially digital ones, the resolution can be artificially reduced so the sensor capabilities are not used; some examples of such have been released to the press.