A wide variety of instruments are used for studies of nuclear magnetic resonance. Most of these instruments contain the following three major components: 1) Magnet 2) Probe 3) RF electronics. In a typical NMR spectrometer the magnet is in the shape of a hollow cylinder and the probe is placed within it; the sample is placed in a location such that the probe surrounds the sample. However, the geometry and placement of magnet, probe and sample may be changed if required. For example, in the case of NMR logging, the magnet is inside, the probe surrounds it and a hollow cylindrical region surrounding it is sampled for NMR signals.

The probe in an NMR spectrometer is responsible for coupling the radio frequency electromagnetic field generated by the RF transmitter to the sample. It is also responsible for detecting the NMR signal (through induction) and passing it to the receiver for amplification and digitization. 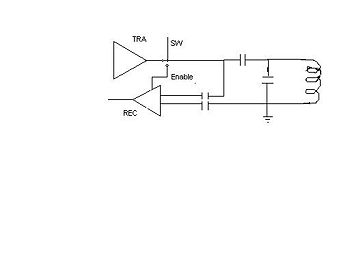 (CC) Image: Sekhar Talluri
Schematic diagram of a probe and RF switch. The RF switch couples either the receiver or the transmitter to the probe.

In the earliest NMR spectrometers, the probe consisted of a pair of orthogonal coils. One coil was coupled to the RF transmitter and was used to generate a homogeneous RF electromagnetic field over the sample area of interest. Continuous RF or pulses of coherent RF radiation were used to create transverse magnetization in the sample. The precession of this transverse magnetization would cause induction in a second coil known as the receiver coil. The receiver coil was orthogonal to the transmission coil. However, at present, most NMR spectrometers and MRI instruments use a single coil for both transmission and reception.

MR electronics consists of a subsystems for controlling the MR transceiver, magnetic field gradients, field frequency lock, spinner speed, temperature of the sample (VT), and an interface to a computer for receiving controlling instructions and to transmit the digitized data.

Recently it has become possible to consolidate all the essential electronic functions as well as the probe into a single integrated circuit.

The MR transceiver contains two major subsystems: The transmitter and the receiver subsystems

RF switch is responsible for coupling either the Transmitter or the Receiver subsystem to the probe. This ensures that the sensitive receiver subsystem is not overloaded with the high powered RF signal generated by the transmitter system. Also, the receiver is 'blanked' during the transmission and for a short duration afterward.

Receiver subsystem: This consists of the components: Preamplifier, Amplifier, Mixer and the Analog-to-Digital converter (ADC). The Mixer is used to subtract a reference frequency of specified phase from the observed signal, resulting a signal of lower frequency that can be easily digitized.