Mission Santa Barbara is a former religious outpost established by Spanish colonists on the west coast of North America in the present-day State of California. Founded on December 4 (the Feast Day of Saint Barbara), 1786 by Roman Catholics of the Franciscan Order, the settlement was the tenth in the twenty-one mission Alta California chain. Named after a 3rd-century Turkish martyr, Mission Santa Barbara features the only under-the-chapel crypt in any California mission, and is the only mission to remain under the leadership of the Franciscan Friars since the day of its founding. The Mission also has the oldest unbroken tradition of choral singing among the California Missions. Designated as a historic landmark at both the state and national levels, today the chapel serves as a parish church within the Roman Catholic Archdiocese of Los Angeles.

Mission Santa Barbara's name comes from the legend of Saint Barbara, a girl who was supposedly beheaded by her father for following the Christian Faith. The Mission grounds occupy a rise between the Pacific Ocean and the Santa Ynez Mountains, and were consecrated by Father Fermín Lasuén, who had taken over the presidency of the California mission chain upon the death of Father Presidente Junípero Serra. Originally settled to evangelize the local Chumash (Canaliño) tribe, Mission Santa Barbara is the only mission to remain under the leadership of the Franciscan Friars since the day of its founding. The early missionaries built three different chapels during the first few years, each larger than the previous one. It was only after the great Santa Barbara Earthquake on December 21, 1812,[13] which destroyed the existing buildings, that the construction on the current Mission was begun. It was completed and then dedicated in 1820. The towers were considerably damaged in the June 29, 1925 earthquake,[14] but were subsequently rebuilt. The appearance of the inside of the church has not been altered significantly since 1820.

Many elements of the Mission's extensive water treatment system, all built by Chumash Indian labor (including aqueducts, two reservoirs, and a filter house) remain to this day, as does a grain mill; the larger reservoir, which was built in 1806, has been incorporated into the City's water system. The original fountain and lavadero are also intact near the entrance to the Mission. A dam constructed in 1807 is situated in the current Santa Barbara Botanic Garden up "Mission Canyon." The Mission's tanning vats, pottery kiln, and guard house are all in ruins to this day. In 1818, two Argentine ships under the command of the French privateer Hipólito Bouchard approached the coast and threatened the young town of Santa Barbara. The padres armed and trained 150 of the neophytes to prepare for attack. With their help, the Presidio soldiers confronted Bouchard, who sailed out of the harbor without attacking.[15]

After the Mexican Congress passed An Act for the Secularization of the Missions of California on August 17, 1833 Father Presidente Narciso Durán transferred the missions' headquarters to Santa Barbara, thereby making Mission Santa Barbara the repository of some 3,000 original documents that had been scattered through the California missions. The Mission archive is the oldest library in the State of California that still remains in the hands of its founders, the Franciscans. Beginning with the writings of Hubert Howe Bancroft, the library has served as a center for historical study of the missions for more than a century. In 1840, Alta California and Baja California were removed from the Roman Catholic Diocese of Sonora to form the Roman Catholic Diocese of Both Californias. Bishop Francisco Garcia Diego y Moreno, OFM, established his cathedral at Mission Santa Barbara, making the chapel the pro-cathedral of the diocese until 1849.

Under Bishop Thaddeus Amat y Brusi, C.M., the chapel again served as a pro-cathedral, for the Roman Catholic Diocese of Monterey in California and then the Roman Catholic Diocese of Monterey-Los Angeles, from 1853–1876. It is for this reason that of all the California missions, only the chapel at Mission Santa Barbara has two matching bell towers. At that time, that particular architectural feature was restricted to a cathedral church. President Abraham Lincoln signed a proclamation on March 18, 1865 that restored ownership of the Mission proper to the Roman Catholic Church.[16] Thereafter, the Mission's leader at the time (Friar José González Rubio) came into conflict with Bishop Amat over the matter of whether the Mission should be under the ownership of the Franciscan order rather than the diocese. Bishop Amat refused to give the deed for the Mission to the Franciscans, but in 1925, Bishop John J. Cantwell finally awarded the deed to them.

The Mission also has the oldest unbroken tradition of choral singing among the California Missions and, indeed, of any California institution. The weekly Catholic liturgy is serviced by two choirs, the California Mission Schola and the Cappella Barbara. The Mission archives contain one of the richest collections of colonial Franciscan music manuscripts known today, which remain closely-guarded (most have not yet been subjected to scholarly analysis). The original City of Santa Barbara developed between the Mission proper and the harbor, specifically near El Presidio Reál de Santa Bárbara (the "Royal Spanish Presidio"), about a mile southeast of the Mission. As the city grew, it extended throughout the coastal plain; a residential area now surrounds the Mission, although there are public parks and a few public buildings (such as the Natural History Museum) in the area immediately adjacent to the site. Mission Santa Barbara today continues to serve the community as a parish church. 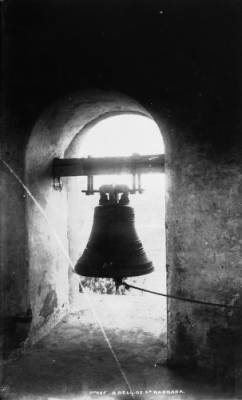 (PD) Photo: William Henry Jackson
View of a bell in one of the towers at Mission Santa Barbara.
Retrieved from "https://en.citizendium.org/wiki?title=Mission_Santa_Barbara&oldid=100857392"
Categories:
Hidden categories: