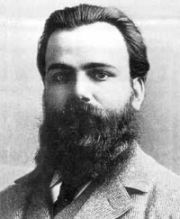 Maxime Bôcher (August 28, 1867 – September 12, 1918) was an American mathematician who published about 100 papers on differential equations, series, and algebra.

Bôcher was born in Boston, Massachusetts. His parents were Caroline Little and Ferdinand Bôcher. Maxime's father was professor of modern languages at the Massachusetts Institute of Technology when Maxime was born, and became Professor of French at Harvard in 1872.

Bôcher received an excellent education from his parents and from a number of public and private schools in Massachusetts. He graduated from the Cambridge Latin School in 1883. He received his first degree from Harvard in 1888. At Harvard, he studied a wide range of topics, including mathematics, Latin, chemistry, philosophy, zoology, geography, geology, meteorology, Roman art, and music.

Bôcher was awarded many prestigious prizes, which allowed him to travel to Europe to research. Göttingen was then the leading mathematics university there, and he attended lectures by Klein, Schönflies, Schwarz, Schur and Voigt. He was awarded a doctorate in 1891 for his dissertation Über die Reihenentwicklungen der Potentialtheorie (Development of the Potential Function into Series), he was encouraged to study this topic by Klein. He received a Göttingen university prize for this work.

In Göttingen he met Marie Niemann, and they were married in July 1891. They had three children, Helen, Esther, and Frederick. He returned with his wife to Harvard where he was appointed as an instructor. In 1894 he was promoted to assistant professor, due to his impressive record. He became a full professor of mathematics in 1904.

Although he was only 46 years old, there were already signs that his weak health was failing. He died at his Cambridge home after suffering a prolonged illness.

Bôcher's theorem states that the finite zeros of the derivative

of a nonconstant rational function

that are not multiple zeros of

and particles of negative mass at the poles of

, with masses numerically equal to the respective multiplicities, where each particle repels with a force equal to the mass times the inverse distance.

Bôcher's equation is a second-order ordinary differential equation of the form:

The Bôcher Memorial Prize is awarded by the American Mathematical Society every five years for notable research in analysis that has appeared in a recognized North American journal.