In mathematics, a series is the cumulative sum of a given sequence of terms. Typically, these terms are real or complex numbers, but much more generality is possible.

Depending on the number of terms, the series may be finite or infinite. The former is relatively easy to deal with. The finite series is identified with the sum of all terms and — apart from the elementary algebra — there is no particular theory that applies. It turns out, however, that much care is required when manipulating infinite series. For example, some simple operations borrowed from the elementary algebra — such as a change of order of the terms — often lead to unexpected results. So it is sometimes tacitly understood, especially in analysis, that the term "series" refers to the infinite series. In what follows we adopt this convention and concentrate on the theory of the infinite case. 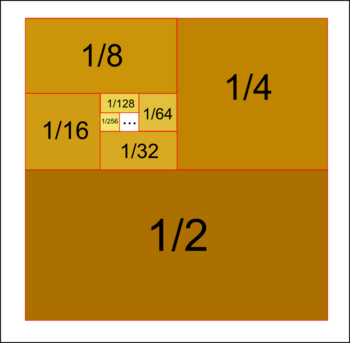 Given a series, an obvious question arises. Does it make sense to talk about the sum of all terms? That is not always the case. Consider a simple example when the general term is constant and equal to 1, say. That is, the series reads as 1+1+1+1+... (without end). Clearly, the sum of all terms can not be finite. In mathematical language, the series diverges to infinity. [1] There is not much to say about such an object. If we want to build an interesting theory, that is to have some examples, operations and theorems, we need to deal with convergent series, that is series for which the sum of all terms is well-defined.

Actually, are there any? Maybe any series would diverge like this? Consider the following series of decreasing terms, where every term is half the previous term:

This is a special example of what is called geometric series. The sum is finite! Instead of a rigorous proof, we present a picture (see fig.1) which gives a geometric interpretation. Each term is represented by a rectangle of the corresponding area. At any moment (given any number of rectangular "chips on the table"), the next rectangle covers exactly one half of the remaining space. Thus, the chips will never cover more than the unit square. In other words, the sum increases when more terms are added, but it does not go to the infinity, it never exceeds 1. The series converges.[2]

One may tend to think that any decreasing sequence of terms would eventually lead to a convergent series. This, however, is not the case. Consider for example the series[3]

To see that it diverges to infinity, let us make the following groups of terms (we may and do forget the one at the beginning):

etc. We will show that sum of each line is at least 1/2. Notice that each group ends by a term of the form

the smallest one in the group. Note also that group that ends by

has two members, the one that ends by

has four members and so on. Generally, a group that ends by

(this is the smallest term)

Obviously, the original sum is at least as big as this and our claim follows: the sum of each group is at least one half. And since there are infinitely many of such groups, the sum of all terms is not finite.

These examples show that we need criteria to decide whether a given series is convergent. Before such tools can be developed we need some mathematical notation.

of elements that can be added, let

Then, the series is defined as the sequence

is called the partial sum of the series.

has a finite limit, the series is said to be convergent. In this case we define the sum of the series as

Note that the sum (i.e. the numeric value of the above limit) and the series (i.e. the sequence

) are usually denoted by the same symbol. If the above limit does not exist - or is infinite - the series is said to be divergent.

The simplest to investigate are the series with positive terms

In this case, the cumulative sum can only increase. The only question is whether the growth has a limit. This simplifies the analysis and results in a number of basic criteria. Notice that it is not positivity that really matters. If a given series has only negative terms, a "symmetric" argument can always be applied. So the only thing we really need is the constant sign. However, for the sake of clarity, in this section we assume that the terms are simply positive.

There is a "family" of relative tests. The nature of a given series is inferred from what we know about another series, possibly simpler one.

If for two series

and if the series

is known to be convergent, then the other one,

is convergent as well. In other words a series "smaller" than a convergent one is always convergent. This is not difficult to justify. When we consider series of positive terms, the cumulative sum may only increase. For convergent series the growth is not unlimited -- there is an upper bound. Accordingly, the growth of the "smaller" series is limited by the same bound.

The above argument works the other way round too. If for the two series we have

is known to be divergent, then the other one,

diverges as well. In other words a series "bigger" than a divergent one is divergent too.

A very useful version of comparison test may be expressed as follows. If for two series

it can be established that

with a finite strictly positive constant

, then both series are of the same nature. In other words, if one series is known to converge, the other converges as well; if one diverges, so does the other.

Comparison with integral. This can be done if the sequence of general terms is decreasing, that is

More precisely, suppose that we have

for a certain decreasing function f defined on

converges, so does the series

This equivalence is quite important since it allows to establish convergence of a given series using basic methods of calculus. Prominent examples include the Riemann series, that is the series with general term

If we take the function

The limit at infinity exists if and only if

. It follows that the series

converges if and only if

There are also tests that allow to determine the nature of a given single series. Two most popular are listed below.

In its simplest form it involves computation of the following limit

. A short computation gives L = 1. Notice that we showed that this series is divergent. On the other hand, if

, the series was shown to converge. Still, if we compute L from the above formula, we get L = 1.

here refers to the upper limit of the sequence). Similarly as before, L > 1 implies divergence, L < 1 means that the series is convergent. The case L= 1 does not allow to decide.

does not exist (the upper limit is equal to 1, the lower limit is 1/2). Nonetheless the root test gives

and this determines that the series converges.

In general, the root test is more universal in the following sense: if the limit L of the ratios

exists, then the limit of roots

exists as well and both are equal. On the other hand, if the ratio test fails to give an answer due to L = 1, then there is no hope that the root test allows to decide. 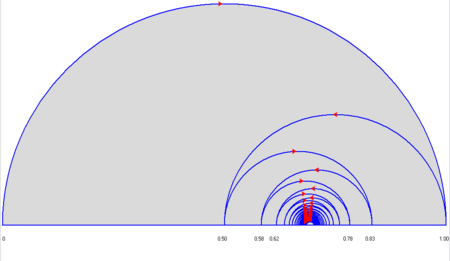 Fig. 2 Alternating series converges if the "steps" are shortening.

In general, a given series may contain terms of different sign. This may lead to very delicate situations. Consider a simple example, called the alternating harmonic series

Denote the general term by

Imagine that each term represents a small step along a line. Considering the sign, we swing back and forth. And it is easy to see that due to shortening the step we will approach a certain point, just like a damped pendulum -- see Fig. 2. This informally shows that

converges. Furthermore, we know the actual sum of this series, it equals to

(this needs some actual computations, though). Now we reorganise the terms and consider

just in different order. Furthermore, simplifying the expression for

It follows that the total sum is

. And we changed only the order...

Even a more general result can be shown: for any given number

we can find a rearrangement of terms in our series

To assure a more regular behaviour the notion of absolute convergence is introduced. We say that a series

is absolutely convergent if the series

converges. The absolute convergence is stronger that the simple convergence introduced at the beginning. This means that any absolutely convergent series is convergent in the former sense. Consequently, given a series with arbitrary terms

one may apply any of the above mentioned basic criteria to

However, as we showed there are interesting series that are convergent but not absolutely convergent. Typical examples include alternating series, that is series whose general term each time changes the sign:

For these we have a criterion.

With this useful tool we immediately see that our alternating harmonic series converges. This is not very surprising -- since an actual proof of the criterion is just mathematicaly rigorous transcription of what can be seen on the Fig.2.

Notice that the relative tests from the previous section do not apply for alternating or arbitrary series (unless one investigates the modulus of the general term and the absolute convergence question). Consider the following examples

converges to 1). The first series converges in virtue of our last criterion while the second one may be shown to diverge.[6]

We can invert the question we dealt with so far ("what can guarantee the convegence") and ask what follows from the convergence of a series. What all convergent series have in common? Here is an answer.

That is, the general numbers, taken as a sequence, converge to 0. For example, the series with the general term

can not be convergent.

On one hand, the sum of a series

is defined in the same way as above, — as the limit of the sequence of functions

It is convenient to reduce the general convergence,

, to the special case,

For example, the sequence of functions

converges to 0 pointwise but not uniformly. It means that, given

converges to 0 for every x (which means, x not depending on n), but

need not converge to 0 for arbitrary sequences

Every example of the sequence of functions

is relevant to the general theory of functional series, since it corresponds to some example of the series of functions

For a sequence of continuous functions on

, still, uniform convergence does not follow from pointwise convergence. For example, functions

in spite of pointwise convergence to 0. Here is a similar example for periodic functions on the whole line:

The uniform convergence of

to 0 can be written in the form

usual convergence of some numeric characteristics of these functions. Many other modes of convergence are also of this form. Some examples:

Most important are two classes of series of functions: power (especially, Taylor) series whose terms are power functions

; the latter being the real part of the complex number

is also treated as Fourier series.

These two classes are unrelated when

is real, but related via complex numbers: if

Taylor and Fourier series behave quite differently. A Taylor series converges uniformly, together with all derivatives, on

. Some distributions (generalized functions) also may be developed into Fourier series, in which case convergence is much weaker.