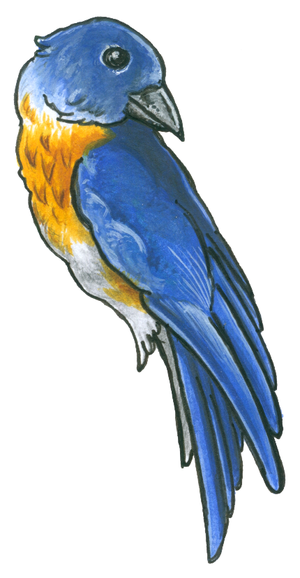 The marlet, in English heraldic tradition, is a bird depicted quite similar to a sparrow or house martin, though missing legs and feet. The bird is used by English heralds as a cadency mark for a fourth son.

The earliest known depiction of a merlette comes to us c. 1185 in the coat of arms of the Mello family of Normandy, and soon after in the canting arms of families such as Merlot and Merloz. This gives weight to the notion that the heraldic bird originally intended to depict a blackbird, known as merle in the French language. However, from the 14th century onwards the term merlette appears to be employed as a generic term for any small bird, appearing in the canting arms of families such as Oisery, Oisy and Loiseau, and is no longer representative of any specific species of bird. During this period, the depictions vary between the footed and footless merlette; from the late 15th century onward the bird is more frequently depicted without a beak in emblazonings. Also in the 15th century, confusion between the merlette and the canette, or duckling, seemingly arises, giving the merlette the appearance of a duckling without bill or feet.

Coincidentally, the French merlette was confused with the martlet in England, the common folk name for a swift at the time. The earliest examples of the martlet in English heraldry show the bird to be footed, but by the end of the 13th century the footless depictions become more frequent, and the bird is even found without a beak in some examples. This custom may have arisen, as one theory suggests, from the folk belief that the swift was legless, or, that the legs of the swift were too tiny for the bird to walk on them; the Latin name for the bird, apus, is itself derived from an ancient Greek word meaning "without feet". Several instances of footed martlets do appear since then, as the custom had not yet been universally accepted; the martlets of John de Bassingbourne are without legs, those of Furnival are with legs, Robert Muschet depicts sparrow-hawks without feet in his arms and a 13th century panel in Westminster of Edward the Confessor's arms show the martlets as doves with feet. Another theory suggests that the footless martlets were devised out of a pragmatic need to free up the sometimes limited space on the escutcheon, especially in the instances of the orle of martlets that decorated the border of a shield with several of the birds, and that this practical approach eventually became the norm over time.