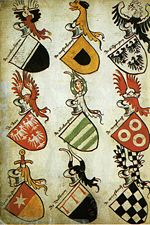 Heraldry, in its most general sense, encompasses all matters relating to the duties and responsibilities of officers of arms.[1] To most, though, heraldry is the practice of designing, displaying, describing, and recording coats of arms and badges. Historically, it has been variously described as "the shorthand of history"[2] and "the floral border in the garden of history."[3] The origins of heraldry lie in the need to distinguish participants in combat when their faces were hidden by iron and steel helmets.[4] Eventually, a system of rules was developed in the display of heraldic devices that became, for the most part, standard across the European continent, Russia and parts of the Near and Middle East.

The system of blazoning arms that is used today has been developed by the officers of arms since the dawn of the art. This includes a description of the shield and, if present, the crest, supporters, mottoes and other insignia. An understanding of these rules is one of the keys to sound practice of heraldry. The rules do differ from country to country, but there are many aspects that carry over in each jurisdiction.

Though heraldry is nearly 900 years old, it is still very much in use. Many cities and towns in Europe and around the world still make use of arms. Personal heraldry, both legally protected and lawfully assumed, has continued to be by private citizens across the globe. Heraldic societies endure to promote understanding of and education about the subject.

Independently of the West, Japan developed its own sytem of heraldic devices known as mon.