Mark Hanna (Marcus Alonzo Hanna, September 2, 1837 – February 15, 1904) was a leader of the US Republican party who rose to fame as the campaign manager of the successful Republican Presidential candidate William McKinley in the realigning Presidential election of 1896, in the first modern political campaign. He became one of the most powerful members of the U.S. Senate, supporting McKinley and harmony between capital and labor.

Hanna was born of Scotch-Irish Quaker stock in New Lisbon, Ohio, where his father Leonard was a country physician, Leonard Hanna who brought the family to the boom town of Cleveland in 1852 and prospered in the grocery business. Mark attended the Cleveland Central High School, where he knew the young John D. Rockefeller and briefly attended Western Reserve College. After working for his father's grocery business, the young Hanna tried his hand in numerous business ventures, mostly without luck. He served briefly as a quartermaster in the Union Army during the American Civil War; he remained a lifelong activist in veterans' organizations. (It is not true that he was awarded the Medal of Honor--that was an unrelated Marcus Hanna.) After 1867 he became rich as a shipper and broker serving the coal and iron industries. Cleveland was emerging as a major transshipping point between the Great Lakes ore deposits and the mills of eastern Ohio and western Pennsylvania, and Hanna loved making deals and bargains on a daily basis over a wide range of products and services. Hanna was one of the few industrialists fascinated less by profits than by the outdoor spectacle and indoor bargaining of politics.

He was a long time member of St. John's Episcopal Church in Cleveland.

Shoemaker (1992) shows during the 1870s and 1880s Hanna was one of several Midwestern Republicans who shifted their local and state parties from a focus on social issues like prohibition to economic issues. Hanna made the Ohio GOP an instrument for government promotion and protection of business in the 1890s. Hanna was a major advocate of the "Commonwealth Idea," a Hamiltonian Whiggish political philosophy which encouraged direct government action to speed up economic modernization and benefit the general interest.

Hanna made a transition into politics during the 1880s and in 1888, he managed Ohio Senator John Sherman's unsuccessful effort to gain the Republican presidential nomination. Rep. William McKinley had been defeated for reelection to the House in 1890 on the issue of the high McKinley Tariff, but campaigned so well the GOP nominated him for governor of Ohio. Hanna helped McKinley win the 1891 and 1893 elections and became his chief advisor. 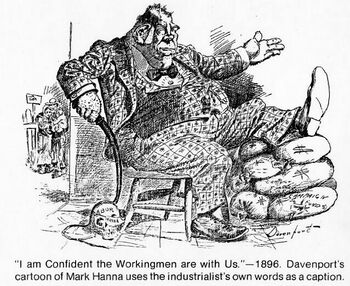 McKinley's only competition for the Republican nomination in 1896 was Speaker Thomas Reed of Maine, but McKinley was the better campaigner and Hanna had built a network of support especially in corrupt southern state conventions. With McKinley as the 1896 Republican nominee Hanna became Chairman of the Republican National Committee, raised an unprecedented $3.5 million for McKinley's campaign for the gold standard, high tariffs, high wages, pluralism and renewed prosperity. Most of the money came from corporations who feared that William Jennings Bryan's more radical Free Silver policy would ruin the entire economy. 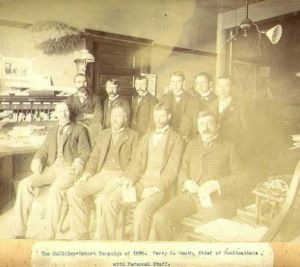 By October the Democrats realized they were losing on Bryan's favorite issue (free silver to cause inflation) and targeted Hanna as the arch-villain who threatened to put corporate interests ahead of the national interest. As McKinley was highly likable, Hanna became a target of Bryanites, especially William Randolph Hearst and his New York Journal, with cartoonists like Davenport portraying him as a bloated sinister figure with a cruel face, wearing a suit decorated with dollar signs.[1]

Hanna's campaign employed 1,400 people, who unleashed a flood of 250 million pamphlets, leaflets, posters, and stump speakers who reached every precinct warning of the dangers of Free Silver and Bryan's radicalism, while promising prosperity and pluralism for all if McKinley won. McKinley scored a landslide with an electoral vote of 271 to 176.

It was the most expensive campaign ever in U.S. politics, with the McKinley campaign outspending Bryan's by nearly 12 to 1. It set the standard for 20th century campaign tactics and funding, especially for its adroit use of publicity, its overall national plan, its strategic use of issues, and especially the candidate's own speech making. 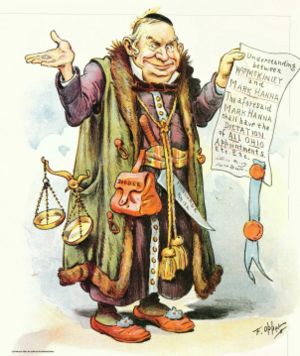 Opper cartoon shows Hanna as Shylock driving a hard bargain in 1897. from Puck

President McKinley appointed elderly Senator John Sherman to the cabinet, opening the way for the Ohio legislature to elect Hanna to the senate seat in March 1897. As the economy recovered and the triumph of the Spanish-American War bolstered McKinley's popularity, the 1900 rematch was a decisive victory and guaranteed Republican dominance of the Fourth Party System. 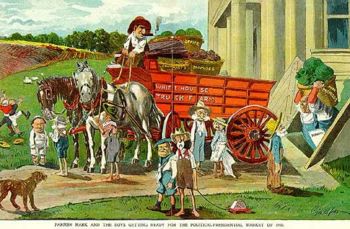 Farmer Hanna prepares for the 1900 campaign by loading up with with patronage, money and promises

In the Senate Hanna became a leader in policy formation. Emerging from McKinley's shadow he played an key role in selecting the Panama route for the trans-oceanic canal. Senator Hanna was, however, disappointed at his failure to resurrect the Commonwealth Idea in support of granting governmental subsidies to the merchant marine.

Hanna's role as president of the National Civic Federation, a major national interest group dedicated to arbitrating labor disputes outside of politics or the courts, demonstrated that Hanna anticipated the key policymaking role extra-party bureaucracies would assume in the emerging administrative state of the twentieth century. He succeeded to a considerable extent in attracting labor unions into the Republican coalition and heading off major strikes that would be not only economically damaging but politically and socially divisive. 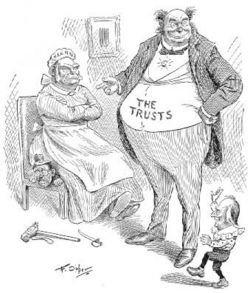 Opper cartoon shows the Trusts using Hanna as a nanny to sit on Roosevelt, while McKinley is a child playing war.

Hanna and Theodore Roosevelt had been allies in the 1890s, but they became rivals, initially due to their disagreement about the Spanish-American War. Roosevelt strongly favored war with Spain; Hanna resisted war until public opinion demanded it. In 1900, New York politicians wanted Governor Roosevelt to become vice president. Hanna was dubious but had no alternative candidate to stop it. One of the leading powers in the conservative faction of the Republican party, Hanna lost influence when McKinley was assassinated. Upon hearing the news, Hanna reputedly remarked that "Now that damn cowboy is president." Hanna and Roosevelt worked together (particularly on the Panama Canal) and although they remained personally cordial, they considered each other political rivals.

Hanna was expected to run against Roosevelt for the Republican nomination for president in 1904 election, but Roosevelt's popularity and Hanna's ill health caused him to drop out of the contest in 1902. The rivalry was cut short by Hanna's death of typhoid fever, at the peak of his power. Karl Rove in 2000 and especially 2004 was influenced by the Hanna model in shaping the George W. Bush election campaigns.

Hanna's daughter Ruth married into the McCormick family in Chicago. As Ruth Hanna McCormick she served as a Republican in the United States House of Representatives.