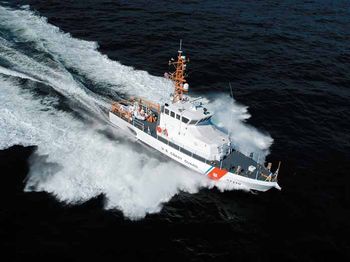 The Marine Protector class cutters are the smallest vessels in the Coast Guard's fleet that are classed as cutters.[1] The vessels have a complement of ten. They were built so that they could be staffed by mixed sex crews. The vessels are lightly armed, their main armament being two Browning M2 machines guns, mounted on pintles on either side of the bow.

The vessels were built with an innovative stern-launch ramp for their fast waterjet-powered pursuit craft.[1] The stern launch ramp enables the vessels to launch a boarding party without bringing the vessel to a halt. Similarly, the vessel's Short Range Prosecutor pursuit craft can drive back onboard the parent vessel, while it is still in motion. Launching and retrieving the pursuit craft requires just one individual to remain on deck.