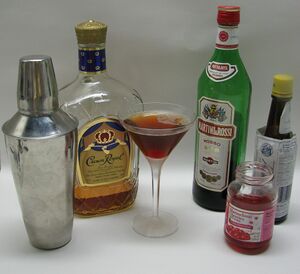 (CC) Photo: Hayford Peirce
The ingredients for a classic Manhattan: Canadian whiskey, sweet vermouth, bitters, a cherry, a chilled glass, and a shaker

A Manhattan is a popular North American cocktail generally served cold in a chilled glass. It is always made with whiskey and sweet red vermouth and sometimes flavored with bitters. Arguments persist, however, about the proper whiskey to use. Proponents of Canadian, rye, and bourbon all cite precedents and authorities to support their own preference. Another point of contention is the proper ratio of whiskey to vermouth; recipes vary from those advocating 4 parts of whiskey to 1 of vermouth to those calling for 1 part of whiskey to 1 part of vermouth. A generally accepted ratio, however, appears to be 2 to 1. A dash or two or bitters is frequently added, but not universally. Doubt also exists about its origins: numerous claims are made about who invented it and where. It is, however, almost always prepared by shaking the ingredients with ice in a cocktail shaker and then straining them into a chilled martini glass. Less frequently, it is strained into a glass filled with ice and served "on the rocks". It is generally served with the last-moment addition of a maraschino cherry.