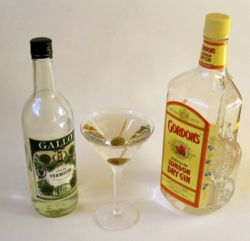 (CC) Photo: Hayford Peirce
A classic martini and its ingredients: gin, dry vermouth, and an olive

A martini is a popular cocktail, particularly in the Anglo-Saxon world, that is made with gin and dry white vermouth and drunk very cold from a chilled glass. Since its first appearance in the 19th century, its popularity has varied dramatically over the decades; at the moment it is apparently enjoying a resurgence. Although numerous variations of the basic cocktail exist, purists insist that both gin and vermouth be used; vodka has replaced gin for many people and the quest for an ever "drier" martini has also led to the complete absence of vermouth in many variations. "Crisp" and "astringent" are words frequently used to describe its taste, but connoisseurs of martinis debate the proper ratio of gin to vermouth; it is generally accepted, however, that 5 or 6 parts of gin to 1 part of vermouth is the classic mix. Connoisseurs also argue the merits of how to chill the drink during its mixing: whether by stirring ice cubes in the liquid or by shaking the mixture in a cocktail shaker along with the ice. Both claim that their method does less to "bruise" and/or dilute the finished drink. A martini is traditionally strained into a chilled glass, then garnished with either an olive or a twist of lemon, although some people drink it "on the rocks", with ice in the glass.

Another never-ending debate concerns the invention of the martini, by whom and where. There are dozens of possible candidates. One of the more famous is Jerry Thomas, author of The Bon-Vivant's Companion. There, he claims that he first made it while tending bar at the Occidental Hotel in San Francisco between 1860 and 1862 and originally called it the Martinez, after a town not far from San Francisco.[1] As the New York Times comments, however, his recipe "calls for maraschino, sweet vermouth and the sweetened gin known as Old Tom."[2] The Times goes on to say that, "On the other hand, the original martini, often made with gin and vermouth in a 50-50 ratio, and almost always with orange bitters, does not look very much like the mercilessly dry vodka martini of the present day."