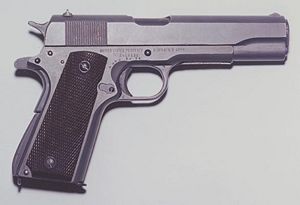 For decades the .45 caliber M1911 pistol, designed by John Moses Browning, was the standard sidearm of the U.S. military.[1] Colt Industries first manufactured it in 1905, and the U.S. Army standardized on it in 1911. The M1911A1 reflected slight design changes in 1922, and the weapon was in production until 1945. In Army service, it was replaced, in 1984, for reasons of NATO standardization, by the 9mm Beretta M9.

The pistol is 8.5 inches long and weights 2.5 pounds. The most common has a seven-round magazine with an ejectable clip; one round can be chambered to give an eight-round capacity. In addition to the right-sided safety lever common to automatic pistols, it also has a "grip safety" that prevents firing unless pressure is applied to the grip handle as would be normal when held in a shooting position. The grip safety prevents a discharge if the weapon were dropped and something hit the trigger while the lever safety was not set.

Since the gun is widely available in the civilian market, many modified parts, such as specialized sights and enlarged magazines, are commercially available. 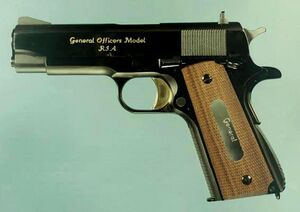 In 1986, the United States Marine Corps modified selected M1911A1's for use by special operations forces. Customized Marine pistols were fine-tuned by gunsmiths for exceptional accuracy and reliability, and replace certain components with higher-quality versions made for civilian markets. For example, the Marine magazines are stainless steel, with a smooth plastic follower (i.e., the part that pushes the cartridges toward the chamber). An ambidextrous safety replaced the right-handed one.

Prior to the adoption of a .45 caliber weapon, the U.S. Army standard had been .38 caliber, but this proved to have inadequate stopping power. The round developed for this handgun is commonly called ".45 ACP", for "Automatic Colt Pistol." It is also used by the Thompson and M3 submachine guns.

There have been complaints that the 9mm used by the M9 also lacks stopping power, and studies are underway for a replacement, possibly returning to .45 caliber.