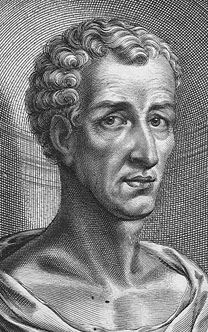 Lucian of Samosata, from a 17th-century engraving

Lucian of Samosata (Λουκιανὸς Σαμοσατεύς, Latin, Lucianus; c. AD 120 - after 180) was a rhetorician and satirist, writing in the Greek language, noted for his witty and scoffing nature.

He was born in Samosata (now inundated in a reservoir of eastern Turkey), in the former kingdom of Commagene, which had been absorbed by the Roman Empire and made part of the province of Syria, thus he referred to himself as a "Syrian" [1]. He probably died in Athens. His birthplace was recently lost when the Atatürk Dam project led to the destruction of the site. Lucian almost certainly did not write all the more than eighty works attributed to him— declamations, essays both laudatory and sarcastic, and comic dialogues and symposia with a satirical cast, studded with quotations in alarming contexts and allusions set in an unusual light, designed to be surprising and provocative. His name added luster to any entertaining and sarcastic essay: over 150 surviving manuscripts attest to his continued popularity. The first printed edition of a selection of his works was issued at Florence in 1499. His best known works are A True Story (a romance, patently not "true" at all, with its trip to the moon), and Dialogues of the Gods and Dialogues of the Dead.

Lucian was trained as a rhetorician, a vocation where one pleads in court, composes pleas for others, or teaches the art of pleading, but Lucian's profession was more as a professional comedic lecturer, something not unlike what today might be considered stand-up comedy. He traveled from town to town, giving amusing discourses and witty lectures often improvised on the spot, somewhat as the rhapsodes had done in declaiming poetry at an earlier period. In this way Lucian travelled through Ionia and mainland Greece, to Italy and even to Gaul, and won considerable wealth and fame.

Lucian, in his lectures, quite frequently took on well-known works from the Classical period of Greek writing and philosophy, standing them on their heads. In his Symposium, far from Plato's original vision of philosophical discourse, the diners get drunk, tell smutty tales and behave badly. By way of satirizing Homer, Lucian became one of the first novelists in occidental civilization. In A True Story, a fictional narrative work written in prose, he parodied outlandish tales told in the style of the Odyssey, describing in mock seriousness a voyage to the Isles of the Blessed where he quizzes Homer on which came first, the "Iliad" or the "Odyssey". The narrative includes a description of a visit to the Moon where he becomes entangled in a war between the Lunites and Sunites, as well as an extended stay on an island inside the belly of a whale. With episodes such as these, Lucian anticipated "modern" fictional themes such as voyages to the moon and Venus, extraterrestrial life and wars between planets centuries before Jules Verne or H. G. Wells. He could actually be called the Father of science fiction, as his more fanciful tales of journeys to the Moon, an island inside a whale, and a city built on an immense cork, have inspired writers from Jonathan Swift to Jules Verne, and the influence of his more fanastical tales can be traced through Rudolf Erich Raspe's Baron Munchausen tales into films such as Terry Gilliam's Adventures of Baron Münchausen.

Lucian also wrote a satire called The Passing of Peregrinus, in which the lead character, Peregrinus, takes advantage of the generosity and gullibility of Christians. This is one of the earliest surviving pagan perceptions of Christianity. His Philopseudes (Greek for "Lover of lies") is a frame story which includes the original version of "The Sorcerer's Apprentice".

Lucian's Dialogues of the Dead are often cited as a key instance of Menippean satire, a genre within which social types are the basis for episodic tales of social satire. Some critics connect the tradition with the works of Chaucer and Boccaccio.

The Amores transmitted among the works of Lucian is probably not a genuine work, ascribed by some to Lucian himself, and by others to pseudo-Lucian.

Lucian's works were known throughout the late Classical world, and following their first printed edition in 1499, were familiar to Western writers from the Renaissance onward. Jonathan Swift was an admirer of Lucian, taking many cues from him in writing Gulliver's Travels, and Henry Fielding, in his preface to Tom Jones, cites Lucian as a precursor. His style can be seen in Rabelais's Voyage of Pantagruel, and the central plot of Cyrano de Bergerac's Journey to the Moon is borrowed from Lucian's True History, though much expanded.

According to Professor Henry Morley, "The best translation of the works of Lucian into English was that by Dr. Thomas Francklin, sometime Greek Professor in the University of Cambridge, which was published in two large quarto volumes in the year 1780, and reprinted in four volumes in 1781."[2] Morley neglects to mention, however, that Francklin's translation was heavily Bowdlerized; in dealing with the same perceived obsenities, the editors of the Loeb classics set a strange precedent by translating parts of Lucian's text into Italian, apparently on the assumption that this would protect young minds unfamiliar with that language. The Loeb editors also "translated" texts in which Lucian imitated the antique diction of Attic Greece into ersatz Middle English. The best, and most readily available current edition of Lucian in English is the Selected Satires of Lucian, translated by Lionel Casson, and published by W.W. Norton & Co.; it restores all of the phrases and sections thought to be obscene by earlier editors and translators.