A light cruiser is a fast warship, heavier than a destroyer but lighter than a heavy cruiser. They are no longer used by any modern navy. One of the classic applications was the flagship of a group of destroyers making a torpedo attack; the light cruiser, with some armor and heavier guns, was in a better position than a destroyer to control and support the attack. Light cruisers also were useful independent scouts. 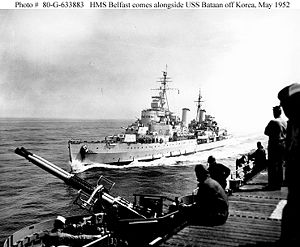 A typical light cruiser, such as HMS Belfast, had main batteries of 6"/152mm guns, secondary batteries of 5" guns or other equivalent to the main guns of destroyers, antiaircraft weapons, and torpedoes. 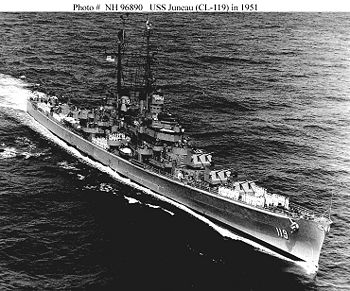 USS Juneau (CLAA-119); note large number of boxy 5" turrets rather than the flat 6" and 8" turrets of light and heavy cruisers

In WWII, the CLAA type, a light cruiser with an exceptionally large number of 5" guns, met with only limited success. Had radar gun control been more advanced, they might have had a chance. A cruiser with good radar and good self-protection could, however, have a role in fighter direction. The most significant advantage of this design was that it was larger and had better sea-keeping characteristics than a destroyer, so it could escort carriers under any weather conditions.

In the early fifties, the Soviet Union built 13 Sverdlovsk-class with twelve 6-inch/152mm guns in triple turrets. They were generally considered obsolescent when built, and the planned 30 ship construction was cut off. Some were used as missile test ships or command ships, others converted for command vessels, and others transferred to other countries.

Recipients liked them because they were impressive-looking ships, bristling with guns, for "showing the flag", but not actually a threat to missile-armed ships with much greater range.

The end of the light cruiser

USS Phoenix, eventually transferred to the Argentinian Navy as ARA General Belgrano, was, somewhat ironically, the last warship to be in service that was at the Battle of Pearl Harbor. She became the first ship sunk by torpedoes from a nuclear-powered submarine, HMS Conqueror, in the Falklands War.

General Belgrano, if she had gotten into the unarmored British warships, or, even worse, the amphibious transports, could have done significant damage. Her armor would have provided at least some protection against the lighter anti-shipping missiles of the British destroyers, although an adaptation was made of the obsolete Sea Cat air-to-surface missile, used in surface-to-surface mode with a concrete warhead. The sheer size and speed of the Sea Cat might have done the damage of the large shells of heavy cruisers and battleships.