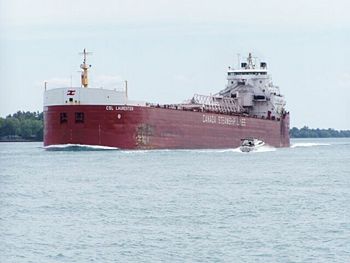 The cargo vessels that work North America's Great Lakes are known as Lake freighters, or Lakers. The most well-known is SS Edmund Fitzgerald, the last major vessel to be wrecked on the Lakes.

Since these vessels all have to proceed through the locks of the St Lawrence Seaway they have features in common, and their appearance differs from similar sized ocean-going freighters. The are narrower. And where the superstructure of an ordinary freighters used to have the bridge in the center of the vessel, lake freighters typically had the bridge and associated superstructure right up in the bow.[1] They had a second island, over the engine room, right aft in the stern. More recently built lakers, like the seawaymax CSL Niagara, have a single large superstructure island right astern.[2]