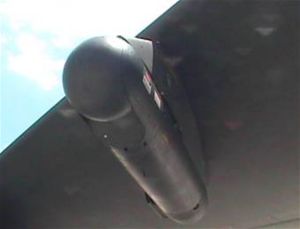 LITENING electro-optical pod on B-52

Originally developed by Israel's Rafael Industries, Northrop Grumman LITENING pods, less frequently known by their formal designation of AN/AAQ-28, are a series of electro-optical target acquisition and tracking pods, which mount on a wing pylon of a variety of aircraft. Their core capabilities are a

These are coupled with with a system to align the instrument views with the orientation of the aircraft. In later models, an optional feature allows air-to-ground transmission of the imagery.

It has gone through several generations, from LITENING II to ER to the current AT. Evolutionary technical steps have involved increasing the range and resolution of the FLIR and LLTV, and adding countermeasures resistance to the designators.

Wing-mounted pods, however, are not stealthy, so the next generation of attack aircraft, such as the F-35 Joint Strike Fighter, have similar electro-optical technology, but mounted inside the fuselage, typically with optical apertures on the nose.