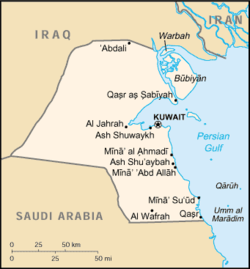 The State of Kuwait is a country on the Persian Gulf. It borders Iraq to the north and Saudi Arabia to the south. Kuwait is well known as a regional center of the oil industry, which accounts for the majority of its economic output. It was invaded by Iraq under Saddam Hussein, who occupied it for several months before being driven out by an American-led force in the 1991 Gulf War. Despite its small size (a little less than the state of New Jersey). Kuwait is one of the most developed Arab countries and plays an important role in the Middle East

Parts of Kuwait have been inhabited since ancient times, most notably Faylakha island, which has evidence of human occupation dating from 3000 BC. Alexander the Great established a trading post on the island, which was called Icaros by the Greeks. The island probably fell under the control of the Selucid, Byzantine, and Sassanid empires when they occupied the surrounding area, although, since the area was something of a backwater, no definitive records exist. Later, nomadic Bedouin tribes inhabited the area, and Islamic armies engaged Persian forces at Kazima in 623 AD, beginning their conquest of Persia.

Sometime before 1613, a small fishing village called Qurain (from the Arabic word Qarn, "hill"), was established on the site of present day Kuwait City by the Bani Khalid tribe. In 1672, Barrak bin Ghuraif, shiek of the Bani Khalid, built a small fortress in the city to protect against the neighboring ruler of Basra. The Arabic word for small fortress is "kuwait", which soon became the name of the entire area.[2]

In 1710, several Bedouin clans were forced by drought to leave their homes, in the central part of modern Saudi Arabia. After several decades of wondering around the Arabian peninsula, they gradually, over several waves, made their way to Kuwait, the first arriving in 1710, and the last by 1756. The new arrivals, known as the Bani Utub, gradually took power from the city's old Bani Khalid rulers. The three most powerful Bani Utub families, al-Sabah, al-Khalifa, and al-Jalahima, agreed to share power in the city in 1716. In 1756, Sabah bin Jaber, a member of the al-Sabah family, was elected as sheik, beginning the al-Sabah dynasty that has ruled the country ever since.

Kuwait prospered under al-Sabah rule. The first wall around Kuwait City was built around 1760. Around this time, the Ottomans, rulers of the port of Basra and most of the Middle East, began imposing large tariffs and trade regulations on merchants. As a result, business began to shift to Kuwait, which grew into a substantial trading center.

In 1766, a conflict arose between Kuwait and the Bani Kaab, and Arab tribe from modern-day Kuzistan, Iran. According to tradition, the conflict was over the refusal by Kuwaiti sheik Abdullah to marry his daughter Mariam to a Bani Kaab man, though Bani Kaab piracy and disputes over Kuwaiti tribute probably played a role. The al-Khalifa and al-Jalahima were unhappy about the war and growing al-Sabah authority, and decided to leave Kuwait (the al-Khalifa would later found the current ruling dynasty of Bahrain). Despite the loss of their allies, the al-Sabah fought off the invaders, according to tradition with the help of Miriam and her cousin Salim. Miriam and Salim would become Kuwait's first national heroes, and even today, "Awlad Salim!" ("Children of Salim!") and "Ana ikhu Miriam!" ("I am the brother of Mariam!") are the two battle cries of the Kuwaiti army.

The war, however, was not over. Further conflicts occurred in 1779, 1780, and 1783, when the Bani Kaab fleet was decisively defeated by the Kuwaitis and forced to pay tribute. Kuwait continued to prosper. Its citizens began to exploit the fields of pearl oysters found off Kuwait's coast-among the richest sources of pearls in the world, they would become the lynchpin of Kuwait's economy until the 20th century. A series of plagues and wars near Basra that continued to 1850 caused more trade to move from that city to Kuwait.

During this time, British influence began to extend in Kuwait. The British East India Company maintained a presence in the sheikdom beginning in 1775. From 1775 through 1779, Kuwait was the main transfer point for mail from India to Britain. At this stage, the British presence in the Gulf mostly existed to protect their route to India.

Meanwhile, Kuwait had other problems. The Wahhabis, Sunni fundamentalists who had taken control of much of the Arabian peninsula, attacked Kuwait in 1793, hoping to conquer it. The Wahhabis defeated Kuwaiti troops on the battlefield, but decided not to attack Kuwait City itself. Kuwait withstood further attacks by Wahhabis in 1794 and 1797, and by the Qawasim, a group of pirates allied with the Wahhabis, in 1810 and 1811. Each time, Kuwait, with the occasional help of the British.

Possibly due to the Wahhabi threat, Kuwait began to seek an alliance with the Ottomans. The Kuwaitis assisted the Ottomans against the Wahhabis, and, in 1871, Kuwaiti sheik Abdullah II was given the title of qaimaqam, or subdistrict governor, and Kuwait technically fell under the authority of the Ottoman governor of Basra, though in practice it remained an independent state.

In 1892, Sheik Abdullah died and was replaced by Sheik Muhammad. Muhammad was a weak ruler, and in 1896, his brother, Mubarak, took control in a coup. Mubarak was more pro-British, and in 1899, signed an agreement officially making Kuwait a protectorate of the United Kingdom.[3]

Mubarak's agreement gave Kuwait duel status as a British protectorate and an Ottoman subdistrict-a somewhat ambiguous situation. In 1913, the UK and the Ottomans signed the Anglo-Ottoman agreement, which recognized Mubarak as an Ottoman sub-district governor while stating that Kuwait was an independent state under British protection.

Mubarak was succeeded as ruler by his sons Jabir (1915-17) and Salim (1917-21). Subsequently, the throne has alternated between their descendants. During World War I, Kuwait remained neutral but gave some support to the British.[4]

Sheikh Ahmed al-Jabir Al Sabah ruled Kuwait from 1921 until his death in 1950, a period in which oil was discovered and in which the government attempted to establish the first internationally recognized boundaries; the 1922 Treaty of Uqair set Kuwait's border with Saudi Arabia and also established the Kuwait-Saudi Arabia Neutral Zone, an area of about 5,180 sq. km. (2,000 sq. mi.) adjoining Kuwait's southern border.

Kuwait achieved independence from the British under Sheikh Ahmed's successor, Sheikh Abdullah al-Salim Al Sabah. By early 1961, the British had already withdrawn their special court system, which handled the cases of foreigners resident in Kuwait, and the Kuwaiti Government began to exercise legal jurisdiction under new laws drawn up by an Egyptian jurist. On June 19, 1961, Kuwait became fully independent following an exchange of notes with the United Kingdom.

Kuwait enjoyed an unprecedented period of prosperity under Amir Sabah al-Salim Al Sabah, who died in 1977 after ruling for 12 years. Under his rule, Kuwait and Saudi Arabia signed an agreement dividing the Neutral Zone (now called the Divided Zone) and demarcating a new international boundary. Both countries share equally the Divided Zone's petroleum, onshore and offshore. The country was transformed into a highly developed welfare state with a free market economy.[5]

The Gulf War and after

In August 1990, Iraq attacked and invaded Kuwait. Iraq claimed that Kuwait's former status as an Ottoman subdistrict subordinate to Basra, recognized in the Anglo-Ottoman convention, made Kuwait legally part of Iraq (which had been given all of the former Ottoman province of Basra following World War I). Iraq, however, had accepted Kuwaiti independence in 1932 and again in 1963, and the Anglo-Ottoman convention Iraq cited specifically recognized Kuwait's sovereignty.

Following the invasion, a UN-mandated coalition led by the United States massed troops in Saudi Arabia. When Iraq still refused to withdraw, the coalition began a several-week bombing campaign followed a ground assault in February 1991 that liberated Kuwait. During the 7-month occupation by Iraq, the Amir, the Government of Kuwait, and many Kuwaitis took refuge in Saudi Arabia and other nations. The Amir and the government successfully managed Kuwaiti affairs from Saudi Arabia, London, and elsewhere during the period, relying on substantial Kuwaiti investments available outside Kuwait for funding and war-related expenses. Several years later, in 1994, Iraq again officially recognized Kuwait's independence.

Both the initial Iraqi invasion and the American bombing campaign significantly damaged Kuwait's economic infrastructure. Retreating Iraqi troops performed many acts of sabatoge, destroying oil pumping stations and refineries and uncapping and setting on fire thousands of Kuwaiti oil wells. Millions of gallons of burning oil poured into the Persian Gulf and seeped into Kuwait's water table, causing tremendous environmental damage. Since the war, Kuwait has rebuilt almost all of its economic infrastructure and has made a nearly complete recovery. [6][7]

Kuwait is a small country, less than the size of Connecticut. The country is entirely desert and receives very little rainfall. Kuwait's soil is very sandy, and it is underlain by geological formations containing huge deposits of oil as well as reserves of fresh water. Kuwait is mostly flat and has one low ridgeline and no significant mountains. [8]

Kuwait has a very modern economy and high standard of living, mostly driven by its vast oil exports. Agriculture, fishing, and trade are minor economic sectors. Kuwait has mostly recovered from damaged to its infrastructure caused by the 1990-91 Gulf War. Its economy is heavily dependent on imported foreign labor.[9]

In 2009, Kuwait had a total population of 3.49 million of which 68% (2.37m) were non-citizens; of these, about 65% were from Asia (mainly India, Bangladesh and Sri Lanka) and about 30% from Arab countries (mainly Egypt and Syria). Kuwaiti citizens are almost entirely Arab and Islamic, and are divided between a 70% Sunni majority and a Shia minority. There is a significant number—around 100,000—of stateless persons known as the Bidoun, whose provenance is a matter of serious dispute. A large proportion of them are former nomadic Arabs, but many are claimed by the Kuwaiti authorities to be irregular immigrants with long duration of residence.