Kromdraai (26 00'S, 27 45'E) is a fossil-bearing breccia filled cave located about 2km east of the well known South African hominid-bearing site of Sterkfontein and about 45km Northwest of the City of Johannesburg, South Africa. It is situated within the Cradle of Humankind World Heritage Site.

In 1938 the site was brought to the attention of Robert Broom by a local schoolboy named Gert Terrblanche who had discovered several hominin teeth. The teeth formed part of a skull that would become the holotype of Paranthropus robustus. Broom began excavations at the site that would continue until approximately 1947 and would result in the discovery of numerous hominin remains as well as thousands of fossil animals. Two deposits were noted and named at the site - Kromdraai A and Kromdraai B - the latter being the site where the hominin remains were recovered[1]. 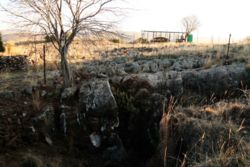 Kromdraai A viewed from the Southwest in 2007.

In 1955 C.K. Brain recommenced work at Kromdraai B and discovered numerous additional hominin remains as well as abundant non-hominin fauna[2]. 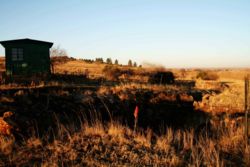 Kromdraai B viewed from the Northeast in 2007.

In 1980's Elizabeth Vrba briefly conducted excavations at Kromdraai B in order to recover additional samples for her work on South African bovids[3]. Her excavations were by far the most extensive since Robert Broom's. This work also recovered a number hominid fossils and her excavations formed the basis of much of the present understanding of the geology of the site. It was this work that spurred the first cores to be drilled at the site and resulting analysis showed that there were caves still present below the site.

In 1993 excavations were re-opened by Francis Thackeray of the Transvaal Museum and Lee Berger of the University of the Witwatersrand. They were later joined by teams from Harvard University and other collaborators[4]. Important results of this work have been the recovery of additional hominin fossils as well as obtaining more accurate dates for the site.