From Citizendium
Jump to: navigation, search
This article is about a Korean dish. For the Jewish grammarian of the 12th century, see David ben Joseph Kimchi 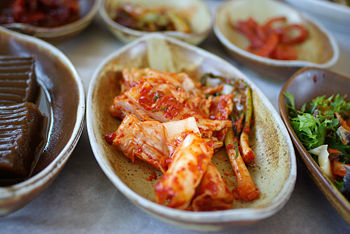 Kimchi (김치), also transliterated as "kimchee" and "gimchi," is a family of Korean vegetable-based pickles. As a side dish, they are a basic part of Korean cuisine, with many variants, although usually strongly flavored, featuring garlic and hot peppers. Kimchi is also a key ingredient for Korean dishes such as kimchi stew and kimchi pancake, and it is often eaten by Koreans with ramen noodles and gimbap rolls. Kimchi is generally considered very healthy due to its lactic acid bacterias, antioxidants, and high fiber content. Although it is widely accepted that the advantages of eating kimchi include improved digestion and bowel function, other benefits, such as increased immunity and reduced chance of cancer, are disputed due to contradicting studies or lack of concrete evidence.[1] Regardless, the Health Magazine listed kimchi as one of the five healthiest foods in the world in 2008.[2]

The kimchi has its roots in the salted vegetables that were preserved as a source of food during the winter months. This practice existed in China and Korea some 3,000 years ago, and its method was later transferred to Japan by the Koreans from Baekje during the Three Kingdoms Period.[3] Accordingly it is theorized that the Koreans originally called the dish chimchae, meaning "the salting of vegetable." The name underwent several phonetic changes over the centuries, to timchae, dimchae, jimchi, and finally kimchi.[4][5]

Kimchi was first mentioned in the historical texts from the Goryeo Dynasty, including guidelines and conventions that detailed a list of kimchi types that were necessary for ancestral rituals. Its appearances in a number of poems from the 13th century to the 15th century indicate that it was widely consumed among the Koreans since this time. The "chimchae" during this period generally consisted of one or two vegetables that were preserved in salt. A new type of kimchi that became popular was the dongchimi, which consisted of pickled radish in salt water and also contained the soup from pickling.[6] A medical journal from this time period listed the vegetables that were mainly used to make kimchi, such as cucumber, wax gourd, garlic chives, curled mallow, lettuce, green onion, and radish.[7]

By the early period of the Joseon Dynasty (1400~1500s), kimchi contained various seasonings, including ginger, garlic, vinegar, mandarin peel, madder, and fennel.[8] Even with these additions, the early kimchi tasted relatively mild compared to the modern kimchi, primarily due to the fact that it lacked red pepper. Some kimchi's were colored red with addition of cockscomb flowers.[9]

During the Joseon Dynasty, kimchi became a very important part of the Korean society and culture. Among the commoners, kimchi was in fact more of a main dish than a side dish, and it was also the primary food during winter. The preparation of kimchi during the months of October and November became a major nationwide event known as gimjang.[10][6]

After the mid-1700s, red pepper and salted sea food were also used as ingredients in making kimchi. Although red pepper was available in Korea since its introduction from Japan in the early 1600s, Koreans were unaware of its usefulness as a seasoning until much later. A series of food shortages and advances in agricultural methods prompted a wide cultivation of the red pepper that was once noted to be "poisonous." The addition of salted seafood, which allowed for a substantially lower overall salt content, was also much delayed, since a variety of it existed in Korea since the Three Kingdoms Period.[7] This new type of red and spicy kimchi quickly became a staple by the late period of the Joseon Dynasty and assumed form of the modern kimchi.

The most prevalent type of kimchi today is the baechu kimchi, containing Chinese cabbage. The Chinese cabbage was imported from China around 1850, and cabbage kimchi began to appear only by the end of the 19th century.[8]

"Summer kimchi" is made from leaves and cores of the cabbage family, while "winter kimchi" is based on white radishes of the daikon family.