Peppers are the fruits of various plants of the genus Capsicum. They originated in the tropical Americas and were cultivated by many pre-Columbian civilizations in Central and South America. Peppers are divided into two groups, sweet and hot. 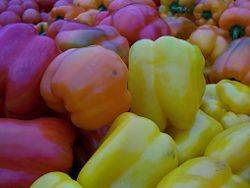 Most types of sweet peppers are also known as bell peppers for their bell-like shape. Bell peppers are red, yellow, or purple when mature, but are often harvested early, when they are green and have a much more bitter taste.

All sweet peppers are varieties of the species Capsicum annuum.

Sweet peppers are eaten stuffed, in salads, or used as a vegetable accompaniment, especially with beef. 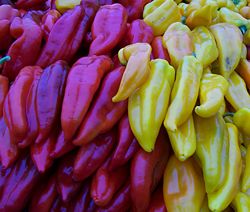 Hot peppers are derived from either C. annuum (including cayenne and chili peppers) or C. frutescens (including tabasco peppers). Their spiciness comes from their high levels of capsaicinoids, the most frequent being capsaicin, and are most concentrated in the placenta, which appear as white "ribs" in the interior of the pepper. Ironically, all capsaicinoids are flavorless and odorless, instead working their "hot" effect directly on pain receptors in the mouth and throat. As a side-effect, the eyes may water, the nose run, and the body perspire.

The capsaicinoid content of peppers—their level of spiciness—is measured in parts per million converted into Scoville heat units, the industry's standard unit of measure. 15 Scoville units is equivalent to one part per million. Peppers range from a Scoville unit value of 0 for bell peppers, to from 200,000 to 300,000 for habanero peppers, one of the world's spiciest. The Scoville heat unit pure capsaicin is 16 million.[1]

In their culinary uses, hot peppers are used to season dishes of all sorts, either as a direct component or in hot sauces. The spices paprika, chili powder, and cayenne are all derived from hot peppers.