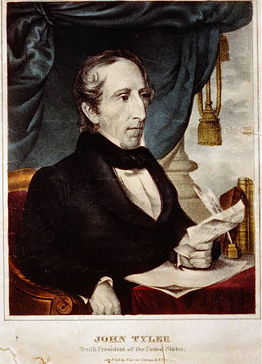 John Tyler, Jr. (March 29, 1790 – January 18, 1862) was a United States politician and the tenth President of the United States (1841-1845). He was Vice President to William Henry Harrison and succeeded him as President when Harrison died. Tyler was the first Vice President to succeed the presidency by the death of the previous president, and was given the nickname "His Accidency" by detractors.

Before becoming President, he was the Governor of Virginia and a Senator from that state. He was initially a member of the Whig Party when becoming president, but later expelled from the party due to his staunch adherence to the principle states' rights and a limited federal government. On foreign policy, Tyler pursued an expansionist course and, as a disciple of Thomas Jefferson and James Madison's philosophy, believed that territorial expansion could alleviate sectional strife and consolidate national unity.[1]

Tyler was born in Charles City County, Virginia, on March 29, 1790. He graduated from College of William and Mary at 1807, at the age of seventeen. He then studied law and was admitted to the Bar in 1809. Among those who taught him law was America's first Attorney General Edmund Randolph. Tyler disagreed with Randolph as Randolph supported a strong central government while Tyler was deeply suspicious of federal power, fearing that the northern industrialists and working class would use the central government to weaken the interests of Southern planters. In 1811 he started his legal practice and was known for his effective handling of criminal defense cases.[2]

Between 1811 and 1816 Tyler served in Virginia State House of Delegates, and was a member of the Council of State in 1816. In 1813 he was also the captain of a military company. In 1816 when Congressman John Clopton died, Tyler took over his seat in the House of Representatives. In the House, Tyler opposed the nationalist bills, particularly Henry Clay's "American System of internal improvements. He also spoke against the passage of Missouri Compromise.[2] He declined renomination in 1821 due to health issues in 1820 and stepped down from the House in 1821.

In 1823 Tyler returned to the Virginia legislature, serving until 1825, when he became the Governor of Virginia. His governorship was uneventful and ended in 1827 when he was elected to the U.S. Senate. During the senate years he went back to Virginia in 1829 and 1830 to attend the state constitutional convention there.

When he first entered the Senate, he was a Jacksonian Democrat. However, later he switched to the faction that opposed President Jackson. This is partly due to his strict constructionist interpretation of the U.S. Constitution and his staunch opposition to excessive federal power. Tyler resigned from the Senate in 1836, and returned to the state legislature in 1839.

In 1840 he ran for Vice President on the Whig Party ticket with William Henry Harrison. Though his political views deviated from the Whig party line, he was selected for his appeal to Southern voters. The Harrison-Tyler ticket used the slogan "Tippecanoe and Tyler, Too" and won the election. Tyler was Vice President in 1841 for a month until Harrison died in office. During that period, Harrison's cabinet was largely dominated by powerful Whig politicians such as Henry Clay and Daniel Webster.

After Harrison's death, Tyler became President of the United States. His administration was marked by the bitter clash between the strict constructionist president and the nationalist Congress with support from the Whig cabinet. He vetoed the National Bank bill twice when it came to his table. He also vetoed a protective tariff, but later approved a softened tariff measure. In 1845, however, the Congress successfully overrode Tyler's veto of another tariff bill; this was the first time it overrode a presidential veto.

Responding to Tyler's stubborn gesture, the Whig cabinet staged a mass resignation in protest, and in the House of Representatives there was even an impeachment attempt on Tyler after he vetoed one of the tariff bills. The committee led by John Quincy Adams asserted that Tyler misused the veto power but did not succeed in moving to initiate an impeachment trial. Tyler installed Southern supporters of states' rights such as John C. Calhoun, to the cabinet in later years of his administration.

The Dorr's Rebellion, an insurrection in Rhode Island, occurred during Tyler's presidency. Tyler did not seek re-election and stepped down from the presidency in 1845. He was succeeded by James K. Polk, a Democrat.

In terms of foreign policy, Tyler was a believer of the "Manifest Destiny" and aggressively engaged in the efforts of expanding U.S. territory. He was relatively successful and his major accomplishments included the annexation of Texas, securing the Webster-Ashburton Treaty, and gaining trade advantage for the United States in China, in the Treaty of Wanghia, one of the "Unequal Treaties imposed on China by western powers.

John Tyler only successfully appointed one justice to the Supreme Court, Samuel Nelson, after two previous nominations to the position were rejected by the Senate. Nelson was a relatively uncontroversial nominee to be confirmed. He served on the court for 27 years, but his career there was rather lackluster.[3] 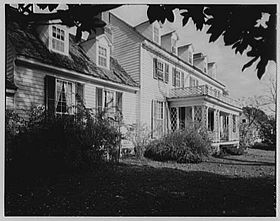 Tyler largely retired from the political arena after finishing his term as president. However, in 1861 he oversaw an unsuccessful peace convention to prevent the impending American Civil War. He then served in the Congress of Confederate States of America. Tyler died in 1862, in Richmond, Virginia.

In history Tyler is often seen as a largely forgotten president, and in a survey conducted by the Federalist Society and Wall Street Journal, Tyler ranks as the 34th greatest president in history, which is "below average".[4]

The John Tyler Community College at Chester, Virginia was named after President Tyler. The city of Tyler, Texas was also named after him, to honor his effort in admitting Texas to the United States.

John Tyler Jr. was the son of John Tyler Sr. and Mary Marot Armistead Tyler. His first wife was Letitia Christian Tyler, married on March 29, 1813. Letitia died in 1842 while Tyler was still in office. He then remarried to Julia Gardiner Tyler in 1844. In total, the president had fifteen children.