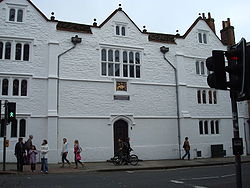 The Royal Grammar School in Guildford where John Derrick was a pupil.

John Derrick (born c.1538, probably at Guildford, Surrey; date of death unknown) was a Queen's Coroner for the county of Surrey who, in 1597, made a legal deposition that contains the earliest definite reference to cricket being played anywhere in the world.

Derrick's deposition is preserved in the "Constitution Book" of Guildford. On Monday, 17 January 1597 (a Julian date which converts to Tuesday, 27 January 1598 in the Gregorian calendar[1]), he bore written testimony as to a parcel of land in the parish of Holy Trinity in Guildford which, originally waste, had been appropriated and enclosed by one John Parvish to serve as a timber yard.[2] This land, said Derrick, he had known for fifty years past and:[3]

Being a scholler in the ffree schoole of Guldeford, hee and diverse of his fellows did runne and play there at creckett and other plaies.

John Derrick was then aged 59 and his testimony confirms that cricket was being played by children in Surrey c.1550 and it is perhaps significant that cricket is the only one of the "plaies" referred to by name.[2] Derrick was a coroner and so it must be assumed his deposition was accurate.[3] The free school he attended was founded in 1509 and is now the Guildford Royal Grammar School (see image above).[4]