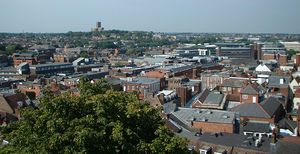 Guildford is the county town of Surrey in England. According to the 2001 UK census it had a population of 66,773. The religious makeup of these inhabitants was 70.0% Christian, 1.3% Muslim, and 2.0% other, while the rest either had no religion or chose not to disclose such information.[1] 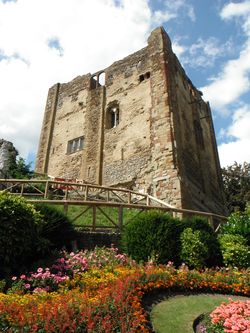 The town's origins may be Anglo-Saxon as by the time of Alfred the Great, Guildford was owned by the monarchy and was mentioned in the King's will.[3] In the aftermath of the Norman Conquest in 1066 many castles were established in England. One was erected in Guildford, although it is uncertain when it was founded as it was not documented until the 1170s. Stylistically parts of it date from the late 11th or early 12th century.[4] As Guildford was the county town of Surrey it was a centre of administration, and the Norman castle (built in the 11th century) was used as a county gaol from 1202 onwards.[3]