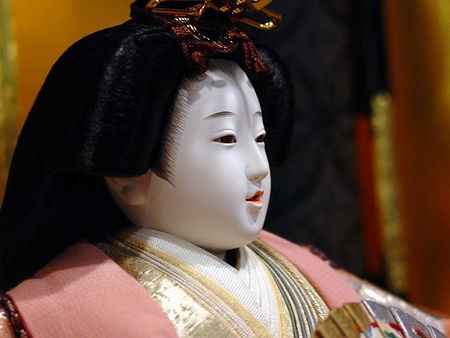 Japanese dolls (雛人形 hina ningyoo) are highly significant in the culture of Japan, with dollmaking a long-standing tradition and dolls a strong part of Japanese popular culture. The most important time of year is the 3rd March Doll Festival (雛祭り Hina Matsuri), also known as Girls' Day or the Peach Festival (桃の節句 Momo no Sekku, because of peach blossom blooming), when families put out on display a range of elaborately-garbed dolls to celebrate their daughters, but dolls also form part of other traditions and recent art too.

Homes and shops put up traditionally-clothed dolls of various sizes, set on a red dais, around 3rd March. These feature the emperor and empress, attended by a court retinue: warriors, ministers and so on. Full versions include 15 dolls and apparatus such as utensils for the tea ceremony (茶の湯 cha no yu). The most elaborate sets can fetch many millions of yen (tens of thousands of US$). The Doll Festival is celebrated to ensure girls' future happiness, and this link to daughters is rooted in the use of dolls in children's play. However, the Doll Festival itself has been part of Japanese culture only since the Edo period (江戸時代 Edo Jidai, 1603-1868). Dolls themselves go back much further than that, to the beliefs of the Heian period (平安時代 Heian Jidai, 794-1185). At that time, it was thought that evil could be ritualistically transferred to a paper image called a katashiro (形代), which were then cast to the river or sea. Japanese dolls today may be the result of the combination of katashiro and paper dolls children once played with. Ultimately, dolls may go back to clay figurines of the Jomon period (c.10,000 - 300 BCE), doguu (土偶), which were associated with fertility or shamanistic rites, at a time when dolls were thought to have souls.

The traditional belief that dolls can absorb harmful spirits is represented in modern Japan at Iwatsuki (岩槻区 Iwatsuki-ku) in the city of Saitama (埼玉 Saitama-shi), a centre of dollmaking. A ceremony held in November allows the owners of dolls that have soaked up bad spirits to purify them. Dolls are exchanged for an amulet - for a charge - which is placed on a funeral pyre. 29th April sees another ceremony at Iwatsuki, Nagashi-Bina (流し雛 'floating dolls'), where people cast away paper dolls onto the river, using little boats into which is also placed paper on which wishes for the future are written. This also takes place on 3rd March elsewhere in Japan.

Dolls are also commonplace in popular culture, such as in the work of Simon Yotsuya (四谷シモン Yotsuya Shimon), whose works include metre-high dolls, and Shigure Akagi's (紅樹時雨 Akagi Shigure) more android-like productions. Super Dollfie (スーパードルフィー Suupaa Dorufii), or do-it-yourself dollmaking, has broken out of Japan to become a worldwide craze amongst doll collectors; traditional dolls are still highly sought after. Another connection between Japan and abroad was the 1927 exchange of 'Friendship Dolls' (友情人形 Yuujoo Ningyoo) with the U.S., as part of an effort to shore up diplomatic relations. Today, these dolls are also highly-prized collectors' items and museum pieces. Examples are held by the Smithsonian Institution in Washington, D.C. and the Yokohama Doll Museum (横浜人形の家 Yokohama Ningyoo no Ie). The favourite type of doll in Japan is Licca-chan (リカちゃん Rika-chan), which first appeared in 1967; a diamond-studded version appeared in 2008, valued at ¥100 million (about US$1 million in 2009).