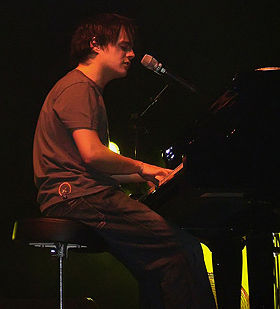 Jamie Cullum on stage in Vienna in January 2006.

Jamie Cullum (born 20 August 1979) is a best-selling British pianist and singer with a raspy voice who plays "jazz-induced music" with "addictive arrangements".[1] While his primary instrument is the piano, he also plays guitar, drums, and is a singer-songwriter with a passion for re-interpreting classics and standard songs. Although primarily his focus is on jazz, he performs in a wide range of styles and has been described as a "crossover" artist.

CBS News describes Cullum's 2009 album The Pursuit as a "warm drink that seeps into your soul".[1] He is the "David Beckham of jazz," according to the CBS News music critic.[1]

Cullum's 2004 album Twentysomething and his followup Catching Tales were so successful that Cullum was given the moniker Sinatra in Sneakers.[1] With boyish charm and self-deprecating humor, he's won over audiences.'[1] He specializes in "quick changes" featuring "the hyperkinetic energy of a 15-year-old skateboarder".[2] He's been known to jump on top of pianos, shakily.[2] He loves playing old and new standards as well as originals, particular pop and jazz and hybrids, even disco.[2] A music critic described one of his performances:

Cullum's Twentysomething sold 2.5 million copies in the first few months.[3] At one point, he took time off to be a disc jockey.[3] He released Catching Teens in 2005.[3] He alternates uptempo numbers with slow standards in The Pursuit.

He's been compared as a mix between Billy Joel and Harry Connick, Jr..[2] His "reined-in volatility" infuses his singing with great emotion.[2]

Cullum loves classic standard songs and has been compared to artists such as Diana Krall and Norah Jones.[4] He discovered jazz after spending time in rock and hip-hop bands, said Cullum in 2004.[4] He credits his musical influences with many artists, including Frank Sinatra, Harry Connick, Jr., Elton John, Billy Joel, Ben Folds, Bob Dylan, and Kurt Cobain.[4] Cullum draws his inspiration from many different musicians and listens to an eclectic mix of music from Miles Davis[5] to Tom Waits and many more. He believes in touring.[4]

Cullum was obsessed with music even as a child growing up in the United Kingdom.[3] He was brought up in Hullavington, Wiltshire, and educated at the independent fee-paying Grittleton House School. He studied English Literature and Film at Reading University and graduated with First Class Honours. His mother, Yvonne, is a secretary of Anglo-Burmese origin, whose family settled in Wales after Burma's independence; his father, John Cullum, worked in finance. His paternal grandfather was an officer in the British army, while his paternal grandmother was a Jewish refugee from Prussia who sang in Berlin nightclubs.

Cullum married TV show host Sophie Dahl privately in January 2010 "because it's ours and it's sacred and it didn't feel like anyone else's business."[6] Dahl has a BBC cookery show called The Delicious Miss Dahl and who describes herself as a "control freak" who "makes the bed while her husband is still in it."[6] Dahl was a former "big-girl" model and writer whose grandfather was the famous award-winning children's author Roald Dahl.[6][7]