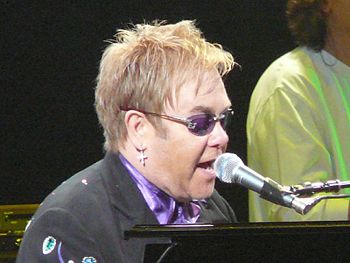 John became a major star in 1970 with the international release of the album Elton John. His first hit in the United States was "Your Song" (1970), but he got his breakthrough in the United Kingdom two years earlier with "Lady Samantha."

Elton John was knighted by Queen Elizabeth II in 1998. He was inducted into the Rock and Roll Hall of Fame in 1994.

Among his most famous songs are "Goodbye Yellow Brick Road", "Rocket Man", "Crocodile Rock", and "Candle in the Wind".

In February 2010, John sparked controversy by suggesting Jesus was a gay man, in an interview conducted with US magazine Parade.[1] The comments angered church leaders and biblical scholars, and was compared by the media with the Beatles's infamous 'We're more popular than Jesus now' quote in the 1960s.[2] The Christian Anti-Defamation Commission called on John for an apology,[3] and there were calls for him to be stripped of his knighthood by Queen Elizabeth II.[4] On 10 March 2010, Christian activist Neal Horsley from Georgia, was arrested by police for making threats, after posting a YouTube[5] video claiming John had 'desecrated the image of the Lord Jesus Christ' and 'blasphemed', while at the same time Horsley was holding an 'Elton John Must Die' placard.[6]