In molecular physics, the Jahn-Teller effect is the distortion of a symmetric—but non-linear—molecule to lower symmetry. The effect occurs if a symmetric molecule would be in a state of degenerate energy, that is, if two or more wave functions with this energy would be eigenfunctions of the molecular Hamiltonian. When energy degeneracy of a molecular state would arise, the Jahn-Teller theorem predicts that a lower symmetry of the molecule exists that has a lower and non-degenerate energy. By the Jahn-Teller distortion the energy of the molecule decreases and the degeneracy is lifted. Wave functions that would have the same energy in the high-symmetric molecule obtain different energies; the lowest of these is non-degenerate and lies below the energy of the undistorted molecule.

The effect is named after H. A. Jahn and E. Teller who predicted it in 1937.[1] It took some time before the effect was experimentally observed, because it is often hidden by other molecular interactions. However, there are now numerous unambiguous observations that agree well with theoretical predictions. These range from the excited states of the simplest non-linear molecule H3, through organic molecules, like cations of substituted benzene, to transition metal complexes and localized impurity centers in solids.

The Jahn-Teller effect has a quantum mechanical origin and there is no classical-physics explanation of it. Therefore, some knowledge of quantum mechanics is prerequisite to the reading of this article. Further Schönflies notation for point groups and Mulliken notation for their irreducible representations are used without further explanation. 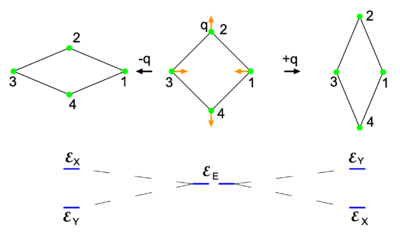 is split by the deformation as shown at the bottom.

The Jahn-Teller effect is best explained by an example. Consider to that end the square homonuclear molecule in the middle of the top row of Fig. 1. The plane of the figure is the xy-plane, with the y-axis vertical and the x-axis horizontal. The z-axis points towards the reader. The symmetry group of the middle molecule is D4h. Let there be two—in principle exact—electronic wave functions that together span the irreducible representation Eu of this group. One wave function transforms as an x-coordinate under D4h and is denoted by |X 〉. Its partner transforms as a y-coordinate and is denoted by |Y 〉. In the case of the perfect square both wave functions have the same energy denoted by

In the middle molecule shown in Fig. 1 an in-plane vibrational normal mode of the planar molecule is indicated by red arrows. Explicitly, with respect to local, parallel, right-handed systems of axes, the red arrows represent the normal coordinate

. Group theory tells us that these energies are different, but without explicit calculation it is not a priori clear which of the two energies is higher. Let us assume that for positive q :

. This is shown in the energy level scheme in the bottom part of Fig. 1. An important observation now is that the leftmost and rightmost distorted molecules are essentially the same, they follow from each other by an in-plane rotation over ±90° around the z-axis (and a relabeling of the identical nuclei). The x and y direction are interchanged between the left- and rightmost molecules by this rotation. Hence the molecule distorted with negative q-value has the energies satisfying: 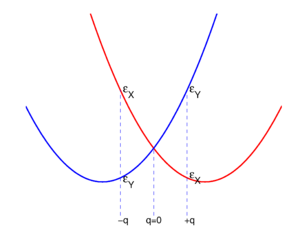 . The crossing point, corresponding to the perfect square, is clearly not an absolute minimum, both curves have a non-zero slope at q = 0. Therefore, the totally square symmetric configuration of the molecule will not be a stable equilibrium for the degenerate electronic state. At equilibrium, the molecule will be distorted along a normal mode away from square, and its energy will be lowered. This is the Jahn-Teller effect.

The above arguments are not restricted to square molecules. With the exception of linear molecules, which show Renner-Teller effects, all polyatomic molecules of sufficiently high symmetry to possess spatially degenerate electronic states will be subject to the Jahn-Teller instability. The proof, as given by Jahn and Teller and reproduced in the next section, proceeds by application of point group symmetry principles; it rests on inspection of all molecular symmetry groups

Jahn and Teller proved in 1937 that in the case of electronic degeneracy the potential energy surface has a non-zero slope in at least one direction at the high-symmetry point. Their proof is based on first-order perturbation theory and application of point group symmetry.

Let us write r for the electronic coordinates and R for the Cartesian nuclear coordinates of a molecule. The highly symmetric configuration (the one that is deformed by the Jahn-Teller effect) is designated by R0. The clamped nuclei Hamiltonian that arises in the first step of the Born-Oppenheimer approximation is

where ΔR describes a deformation of the nuclear framework. The nuclear displacements are assumed to be infinitesimally small, i.e., |ΔR|2 << |ΔR|. This means that the expansion of H can be truncated after the second term, but also that a first-order perturbation approximation is valid; higher-order perturbation approximations yield terms non-linear in the displacements.

The first term on the right-hand side in the previous expression is the zeroth-order Hamiltonian, which by assumption has a degenerate set of electronic eigenstates spanning an irreducible representation μ of the point group of the (undeformed) molecule:

). The second term is the perturbation

Parenthetically, it is of interest to remark that V(r,R) is often referred to as a vibronic interaction. This is because the nuclear coordinates (components of ΔR) describe molecular vibrations and the first derivative of H taken at R0 depends on electronic coordinates only; vibronic is a contamination of vibr(ational) and (electr)onic.

and the angular brackets imply integration over the electronic coordinates r. Evidently,

is a function of ΔR; this function is an approximation of the potential energy surface in the neighborhood of R0.

In order to predict whether the matrix elements of V are vanishing, Jahn and Teller transformed the nuclear Cartesian displacement coordinates ΔRAα to symmetry adapted coordinates Qk by a linear non-singular transformation L

where A runs over the Nnuc nuclei of the molecule and α over the Cartesian coordinates of RA. The elements of the matrix L can be determined by group theoretical projection (an example of a symmetry coordinate Q was given in the previous section; the example specified one of the twelve rows of L). Jahn and Teller tabulate the irreducible representations carried by the nuclear coordinates for all possible point groups. They consider also the six overall rotational/translational vectors separated from the vibrations by application of the Eckart conditions (these are the last six vectors Q3Nnuc−5, …, Q3Nnuc, normal coordinates of zero energy).

For instance for the group D4h (the group of four nuclei on the corners of a square), Jahn and Teller list that the Eckart translational vectors span A2u and E1u. The Eckart rotational vectors span A2g and E1g, and the internal (vibrational) coordinates span A1g, B1g, B2g, B2u, and Eu. The twelve (Nnuc = 4) rows of the matrix L are labeled by these irreducible representations (and in the case of a more-dimensional representation μ by a further subindex running from 1 to fμ).

By a simple application of the chain rule it follows that

where it is assumed that the molecule moves in a homogeneous and isotropic space so that V does not depend on the 3 translational and 3 rotational Eckart vectors. For the groups of interest ∂/∂Qk transforms as Qk and hence Vk(r) is an operator that transforms according to the same irreducible representation as Qk.[3] It is a multiplicative operator, i.e.,

since the electronic kinetic energy terms are contained in the zeroth-order Hamiltonian H(r, R0). The groups of interest all have real irreducible representation matrices, which implies that the zeroth-order wave functions are real.

Group theory tells us that a perturbation matrix element

unless the irreducible representation of Vk is contained in the decomposition of [μ2]. By inspection of their tables Jahn and Teller found that all symmetry groups of all non-linear molecules have non-vanishing perturbation matrix elements for at least one (but usually more) irreducible representation. (Note that the Hermiticity of Vk implies that its (i,j) element is equal to its (j,i) element, so that there at least two non-zero matrix elements for all non-linear molecules).

Consider as an example a molecule with D4h symmetry that has a zeroth-order electronic state belonging to Eu. One needs to inspect

where the first factor corresponds to V and the second to [Eu2]. Non-vanishing cases are A1g⊗A1g and B1g⊗B1g

Assume that Vk has a non-zero matrix element. Then the corresponding displacement Qk appears linearly in the lowest first-order energy correction (lowest eigenvalue of the perturbation matrix); terms of higher order in the infinitesimal coordinate Qk can be ignored; they are small and drop out when the energy is differentiated at the point Q = 0 in order to determine the slope in this point. In other words, the lowest first-order energy correction contains a term CQk for some real C, the slope in the Qk direction. If C > 0, a displacement along −Qk lowers the electronic energy and the molecule will deform in that direction. If C < 0 then a displacement along Qk decreases the electronic energy. The case C = 0 only occurs when the whole perturbation matrix is zero and, as follows by inspection, this case does not arise for non-linear molecules. 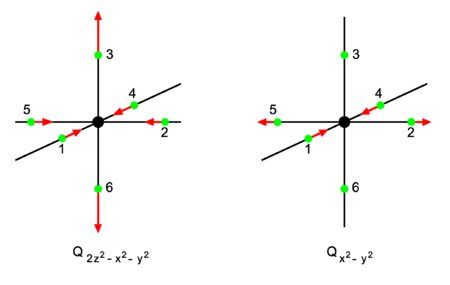 An important field where Jahn-Teller effects are ubiquitous is transition metal chemistry.

In Fig. 3 a transition metal ion (black) octahedrally surrounded by six ligands (green) is shown. This may be a schematic drawing of, say, the copper(II) (oxidation state +2) complex [Cu(H2O)6]2+. Crystal field theory tells us that the five d-atomic orbitals of the central ion are split into two groups: T2g (three orbitals lowest in energy) and Eg (two orbitals of highest energy). Let us consider an ion, like copper(II), with nine d-electrons. This means that the lower three orbitals are doubly occupied accounting for six electrons, and that three more electrons are distributed over the higher two orbitals of Eg symmetry. The total electronic state (one hole in a doubly occupied reference state) is two-dimensional and transforms as the irreducible representation Eg of the octahedral group Oh.

The six translational/rotational Eckart vectors are omitted, hence the total dimension of the space spanned by the vibrational coordinates is 12 = 3×6−6. When the molecule is embedded in a crystal a torque may act on it and the rotational Eckart vector must be included. However, for simplicity sake a free complex is considered. Clearly, the only first-order Jahn-Teller deformations occurring are

The first product stands for a totally symmetric deformation that does not reduce the symmetry of the complex. The vibrational part of the second product is depicted in Fig. 3. The depicted Eg mode corresponds to the following symmetry coordinates in terms of atomic displacements:

The first mode conserves the symmetry of the horizontal square containing 1–2–4–5 and gives an elongation of the z-axis containing ligand 3 and 6. The distorted symmetry corresponds to group D4h. The two-dimensional electronic level Eg splits into two one-dimensional levels, A1g and B1g under D4h. This is the distortion that is most commonly found in copper(II) complexes.

The second vibrational mode distorts the square to a rhombus (as in Fig. 1) and reduces Eg to two different Ag levels of the group D2h.