Rather than the traditional radar role of determining the position and speed of an object, imaging radar includes several technologies that give a visually recognizable picture of targets. Radar pictures are generally not as sharp as those taken by optical sensors, but radar is largely independent of day or night, cloud or sun. Radar can penetrate many materials, such as wooden buildings. Improving the resolution of an imaging radar requires that the antenna size is many times that of the radar wavelength. Wavelength is inversely proportional to frequency, so increasing the radar frequency can improve resolution. It can be difficult to generate high power at the higher frequencies, or problems such as attenuation by water in the atmosphere limit performance. In general, for a fixed sensor, electro-optical sensors, in UV, visual, or infrared spectra, will outperform imaging radar[1] The major types are synthetic aperture radar (SAR) and inverse synthetic aperture radar (ISAR). Radar can also merge with other sensors to give even more information, such as Moving Target Indicator (MTI). Radar generally must acquire its images from an angle, which often means that it can look into the sides of buildings, producing a movie-like record over time, and being able to form three-dimensional views over time.

A synthetic aperture radar (SAR) system, exploits the fast movement of an aircraft or satellite, simulating a large antenna by combining samples over time. This simulation is called the synthetic aperture. [1]

Coupled with other MASINT and IMINT sensors, SAR can, provide a high resolution, day and night collection capability. Recorded over time, it can be excellent for tracking changes. In addition, when operated at appropriate frequencies, it has ground- and water-penetrating capability, and is good for picking objects out of deliberate or natural clutter.

SAR is not, however, a trivial computational task. As the real antenna moves past the target, the range between target and antenna changes, which must be considered in synthesizing the aperture. In discussing SAR principles, Sandia National Laboratories also notes that, "for fine resolution systems, the range and azimuth processing is coupled (dependent on each other) which also greatly increases the computational processing".[1]

In spite of the difficulties, SAR has evolved to a size that can fit aboard a UAV. Flying on the MQ-1 Predator, the Northrop Grumman AN/ZPQ-1 Tactical Endurance Synthetic Aperture Radar (Tesar) started operations, in March 1996, over Bosnia. The AN/ZPQ-1 uses a radar signal in the 10 - 20 GHz J-band, and can work in strip map, spot map, and MTI modes. These modes are applicable to a wide range of MASINT sensors.

Strip map imaging observes terrain parallel to the flight path or along a specified ground path. Resolution depends on range and swath width, and can vary from 0.3 to 1.0 metres.[1]

Compare the two. The radar is not affected by night or weather.

As well as large SAR aircraft such as the E-8 Joint Surveillance Target Attack Radar System (Joint STARS), whose AN/APY-3 radar has multiple modes including ground moving target indication, the US has highly classified radar satellites. Quill launched in 1964, was the first radar satellite, essentially a prototype. A system originally called Lacrosse (or Lacros), Indigo, and finally Onyx appears to be the only US radar satellite system, using pushbroom scans and "spotlighting" SAR[2].

Given that the E-8 is a large aircraft that cannot defend itself, there are US attempts to move the E-8 capability into space, under a variety of names, most recently a simple "Space Radar". In an era of budget demands, however, this extremely costly new generation has not been launched.[2]

ISAR can produce actual images, but the discipline is generally called MASINT rather than IMINT.A much more modest ISAR capability is on the Navy's [3] SH-60 multimission helicopter, carried on destroyers, cruisers, and aircraft carriers. The P-8 Poseidon aircraft, the replacement for the P-3 Orion maritime surveillance aircraft, carries more advanced ISAR, [4] including the Littoral Surveillance Radar System.

P-3 aircraft carry the AN/APS-137B(V)5 radar, which has SAR and ISAR capability. This is part of the general upgrading of the P-3 to make it a capable land surveillance platform. 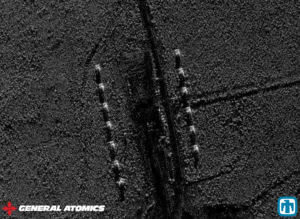 This technique, first demonstrated in the 1970’s from an army airborne system, has evolved considerably. At first, it estimated the angle-of-arrival of backscatter power from a pixel on the ground by comparing the phase difference of the backscattered wave as measured at two different locations. This information along with the traditional range and azimuth (Doppler) information allowed one to locate the imaged pixel in three-dimensions, and hence estimate the elevation of that pixel. Elevation-mapping interferometric SAR systems have since become an important remote sensing technology, with a very specific height-mapping mission. Interferometric SAR systems can now be obtained as commercial off-the-shelf (COTS) products.

Some applications are more classic MASINT categorization than pure imaging, and are further discussed on the Radar MASINT page.

In the 1990s, a new SAR application of coherent SAR showed the ability the detection and measurement of very small changes in the earth’s surface. The simplest form of this technology, known as coherent change detection (CCD), had obvious military and intelligence applications, and is now a valuable tool for analysts. CCD complements other sensors: knowing that the surface changed may mean that analysts can direct ground-penetrating radar on it, measure thermal signatures to see if something is generating heat under the ground, etc. 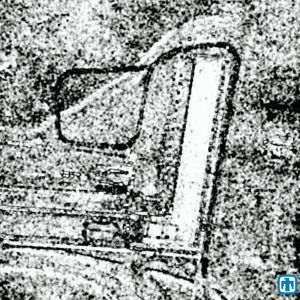 Compare radar CCD and optical equivalents of the same subject. The CCD would not have been affected by night or weather.

Moving Target Indicators (MTI), at first, might seem just an adjunct to imaging radar, allowing the operator to focus on the moving target. That which makes them peculiarly MASINT, however is, especially in combination with other sensors and reference material, allows the measurement of a movement signature. For example, a tank and a truck both might be measured at 40 km/h when on a road. If both turn onto unpaved ground, however, the signature of the truck is that it might slow significantly, or demonstrate much lateral instability. The tracked vehicle, however, might exhibit a signature of not slowing when going off-pavement.

There are several electronic approaches to MTI. One is a refinement of CCD[5]. Differential interferometric SAR is even more precise than CCD. Its use in measuring the ground motion of earthquakes can complement seismic sensors for detecting concealed underground explosions, or the characteristics of those above ground.

Current research and development involves multiple coherent SAR collections to make even more sensitive measurements, with the capability to detect motion as small as 1 mm per year. The new techniques address many of the limiting factors associated with SAR interferometry, such as atmospheric induced distortions[6].

UHF and VHF SAR have begun limited operations on Army RC-12 aircraft and may be implemented on the Global Hawk[7]. DARPA's WATCH-IT program developed robust low false alarm density change detection software to detect vehicles and smaller targets under foliage, under camouflage and in urban clutter, and developed tomographic (3D) imaging to detect and identify targets that have not relocated. VHF/UHF SAR for building penetration, urban mapping and performing change detection of objects inside buildings.