During the Vietnam War, the Army of the Republic of Viet Nam (ARVN) defined I Corps tactical zone (I CTZ)[1] as the five northernmost provinces of South Vietnam: from approximate north to south, these were

Provinces in I CTZ

Its northern border was the Demilitarized Zone (DMZ) with North Vietnam; National Highway 9 ran along it. On the west, it bordered Laos and areas of the Ho Chi Minh trail. 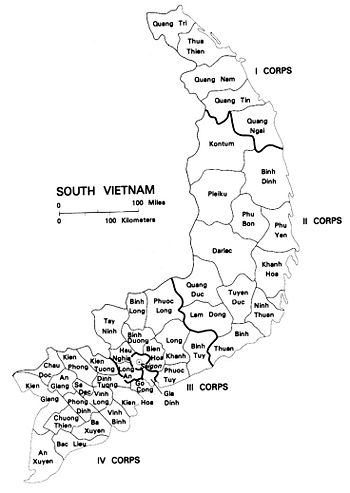 The largest cities of the zone were Hue and Danang. Major engagements, at small locations, included the Battle of Khe Sanh and the Battle of Con Thien.

These areas came under Military Regions 4 and 5, as well as the B-5 Front.[2]

American forces in I Corps began with III Marine Amphibious Force, its name changed from the usual designation of III Marine Expeditionary Force due to "expeditionary force" having unfortunate connotations, to the Vietnamese, from French usage. Later in the war, the Military Assistance Command, Vietnam, asserted more control over the Marines, variously putting a forward echelon of MACV there, and establishing TASK FORCE OREGON and Provisional Corps, Vietnam.

In 1972, Hoang Xuan Lam was dismissed for incompetence.