In atomic spectroscopy, Hund's rules predict the order of atomic energy levels with quantum numbers L (orbital), S (spin) and J (orbital plus spin). The rules are called after Friedrich Hund who formulated them in 1925.[1]

A group of atomic energy levels, obtained by Russell-Saunders coupling, is concisely indicated by a term symbol. As discussed in the article Russell-Saunders coupling, closed shells and closed subshells have L = S = 0 and hence can be ignored in the coupling. A term (also known as multiplet) is a set of simultaneous eigenfunctions of L2 (total orbital angular momentum squared) and S2 (total spin angular momentum squared) with given quantum numbers L and S, respectively. That is, the respective eigenvalues are L(L+1)ℏ2 and S(S+1)ℏ2.

If there is no spin-orbit coupling, the functions of one term (fixed L and S) are (2L+1)×(2S+1)-fold degenerate (have the same energy). If there is weak spin-orbit coupling it is useful to diagonalize the matrix of the corresponding spin-orbit operator within the L-S basis [consisting of the (2L+1)×(2S+1) functions of the term] in the spirit of first-order perturbation theory. This lifts partially the degeneracy and introduces the new conserved quantum number J, with |L-S| ≤ J ≤ L+S, that labels a (2J+1)-fold degenerate energy level. 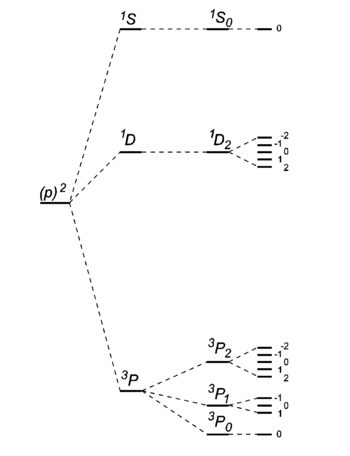 Level scheme of the carbon atom

Formulation of the rules

The levels of the second sort, largest J most stable, can be seen as arising from holes in a closed subshell.