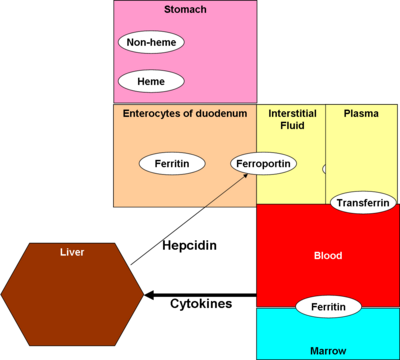 Iron is an essential nutrient for human beings, although it can also be toxic. The most important role is in the heme protein of hemoglobin and cytochrome P-450, and secondarily for myoglobin, which transports oxygen into muscle cells. Iron also is a component of a number of enzymes. The greatest demand for iron is from erythropoesis: hemoglobin for the production of new erythrocytes (i.e., red blood cells). [1]

The actual requirement for iron in food is quite low, as the body conserves iron stores. Erythropoiesis requires 20-30 mg/day, so, with efficient conservation, only 1-2 mg/day of dietary iron is needed. [1]

Not all iron-containing foods, however, provide bioavailable iron. While spinach is legendary as an iron source, the iron in raw spinach is bound into a non-absorbable oxalate. Cooking the spinach does make the iron bioavailable; the cartoon character Popeye the Sailor Man was correct in eating his spinach from a can.

Control mechanisms for iron metabolism are not fully understood, but two models, which may coexist, form current thinking: crypt programming and hepcidin.

The principle of this model is that that enterocytes, in the crypt cells of the duodenum, take up iron from plasma via transferrin receptors 1 and 2 (TfR1 and TfR2). The more iron these cells take up from the plasma, the less they accept from the digestive tract.

A peptide hormone produced in the liver, hepcidin, has received the most attention as the control mechanism. It also affects enterocytes, but also macrophages and the liver. Originally thought to be an antibacterial substance, [2] it is now believed to be an inhibitor of iron intake into the body, [3] by binding to and inactivating ferroportin, according to an August 2008 paper in Cell Metabolism.[4]

Besides its role in erythropoesis, erythropoetin decreases DMT1 and increases ferroportin, thus reducing iron retention in macrophages, at least in rat models. [5]

Iron, in food, is processed differently depending if it is in the form of heme (e.g., in meats) or in other molecules. As food breaks down in the stomach, ferric (Fe+3) iron is reduced to ferrous (Fe+2) iron by the enzyme ferric reductase. Ascorbic acid and other reducing agents stimulates the reduction, and thus stimulates absorption.

Most actual absorption takes place in the duodenum. Heme is absorbed via the heme transporter protein. Non-heme iron enters the apical surface of the enterocytes lining the duodenum via divalent metal transporter 1 (DMT1)[6], carrying iron into the interstitial fluid by a protein called ferroportin (FP). [7]

Complete fermentation of phytates, a longer process than is used in commercial breadmaking, increases the bioavailability of iron in cereal grains. [8]

Transferrin moves iron through the plasma; ferritin stores it.

Ferrous iron, in plasma, is reconverted to ferric, and bound to a carrier protein, ferritin.

Ferritin in plasma stays in equilibrium with ferritin in bone marrow, and plasma ferritin is indicative of actual iron stores in the marrow.

Marrow erythroblasts and liver hepatocytes store iron, primarily as ferritin complex but, to a lesser extent, as the breakdown product, hemosiderin. Hemosiderin is primarily present in macrophages.

Most iron is recycled, principally by macrophages in the reticuloendothelial system.

In mouse models, hepcidin may decrease the expression of ferroportin, controlled by the FPN1 gene. [5]

Not all anemia is due to disorders of iron metabolism, but iron deficiency anemia is a syndrome commonly seen, with many causes. Iron in excess through a metabolic error is less common, and called hemochromatosis. Among children in the U.S., iron supplements are the most common source of serious accidental poisoning.

Hepcidin is markedly induced during inflammation, through the effect of interleukin-6 (IL-6). Increased hepcidin traps iron in macrophages, decreases plasma iron concentrations, and is a mechanism of anemia of chronic disease. [9]