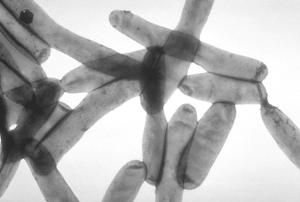 Legionella pneumophila are prokaryotic bacteria that can survive and reproduce inside phagocytic cells such as protists that have eaten them. They are competent in DNA transformation and occasionally capture genes from their eukaryotic host cells.

Horizontal gene transfer occurs when an organism transfers its genetic material to a being other than one of its own offspring. The actual process of this transfer can be by any mechanism, but because genes are not passing by descent, horizontal gene transfer (abbreviated as HGT) is always very different from vertical gene transfer. In vertical descent, parental traits are inherited by progeny by one of two general methods: either (1) sexual reproduction in which gametes form zygotes, a common method in higher animals and plants, or (2) by asexual reproduction, where splitting of cells or an entire organism grows from a fragment, as is usual in bacteria and fungi, but which also happens in some animals and plants. HGT is a much more recently discovered route of passage for genetic material; it is relatively common in microorganisms, and to a lesser extent in plants. By HGT, genetic material can be shared between organisms without the immediate relatedness of mother cell to daughter cells, or parent organisms to offspring; indeed, by HGT material can pass between organismsthat are not even be of the same species, genus, sub-kingdom or kingdom of life form. HGT (sometimes called lateral gene transfer) is very much less common than vertical gene transfer, so its detection requires special techniques.

Evidence from genome science and bioinformatics shows that HGT has occurred between diverse biological taxa that are widely separated in the phylogenetic tree of life. Known HGTs include movement of genetic material between different species of microbes and other microbial taxa such as protists, gene movement between different plant families, between different animals, and between bacteria and plants. 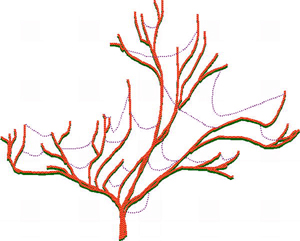 Microorganisms appear to be most affected by HGT, but even in microbes only about 2% of core genes are transferred laterally. Because this percentage is so low, the main lineages of microbial evolution can still be treated as 'trees' branched by vertical descent, with HGT included in the scheme only as 'cobwebs' (see figure at right).

Gene transfers between different biological sub-kingdoms (domains), such as between eukaryotic protists and bacteria, or between bacteria and insects are the most phylogenetically extreme cases of HGT. An example is bacterial 'rol' genes from Agrobacterium species which have been found in tobacco plants (Nicotiniana).[1]

Main features of HGT in nature 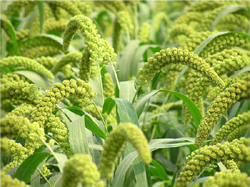 See main article HGT in prokaryotes
The three main mechanisms of HGT in bacteria and archaea discussed here are:

Analysis of the complete genome sequence of the protist Entamoeba histolytica indicates 96 cases of relatively recent HGT from prokaryotes. There is also convincing evidence that a bacterial gene for a biosynthetic enzyme has been recruited by the protist Trichomonas vaginalis from bacteria related to the ancestors of Pasteurella bacteria. Similar analysis of the protist Cryptosporidium parvum reveals 24 candidates of HGT from bacteria. These results fit the idea that 'you are what you eat'. That is, in unicellular grazing organisms, foreign genetic material is constantly entering the cell from food organisms, and occasionally some of this material enters the genome.[7]

Comparison of the genome sequences of two fungi, baker's yeast (Saccharomyces cerevisiae) and Ashbya gossypii, has shown that Saccharomyces has received two genes from bacteria by HGT. One of these genes codes for an enzyme that allows baker's yeast to make pyrimidine nucleotide bases anaerobically, and the other allows usage of sulfur from several organic sulfur sources. Other work with yeasts suggests that eight genes from Yarrowia lipolytica, five from Kluyveromyces lactis, and one from Debaryomyces hansenii are horizontally transferred.[8]

Analysis of DNA sequences suggests that HGT has also occurred within multicellular eukaryotes, by a route that involves transfer of genes from chloroplast and mitochondrial genomes to the nuclear genomes.[9] According to the endosymbiotic theory, chloroplasts and mitochondria originated as the bacterial endosymbionts of a progenitor to the eukaryotic cell, and endosymbiosis can be considered to be a special case of HGT.

Junk DNA is the most obvious general evidence of HGT in eukaryotes. Junk DNA is the name given to the seemingly non-functional repetitive DNA sequences that are a major portion of the genomes of many plants and animals. This DNA usually includes multiple copies of various 'Jumping genes' which can proliferate within a genome after they have been transferred from another species. Examples in the human of such mobile elements are 'Hsmar1' and 'Hsmar2' which are related to the widely studied 'mariner' transposon. Close relatives of mariner mobile DNA have been discovered in organisms as diverse as mites, flatworms, hydras, insects, nematodes, mammals and humans.[11] Retroviruses and retrotransposons are other examples of mobile horizontally transferred DNA found in animals.

The adzuki bean beetle Callosobruchus chinensis is infected with several strains of bacterial Wolbachia endosymbionts. A genome fragment of one of these endosymbionts has been found transferred to the X chromosome of the host insect.[12]

History of discovery of HGT

Decoding the tree of life from genomes scrambled by HGT

Because each organism carries a record of its ancestry in its DNA, methods for rapid gene isolation and analysis of DNA encoded sequences - which can extract the information from this ancestral archive - have been important for answering questions about evolution, and they have enabled rapid expansion of the field of biological systematics known as phylogenetic inference. Comparison of related (homologous) gene sequences from different organisms has made it possible to reconstruct the history of many evolutionary lineages.[13] Many issues about evolution have been clarifed by comparing homologous genes from different species, genera, families, and phyla. Unfortunately, HGT complicates the picture, because HGT 'scrambles' the evidence needed to deduce the branching patterns of evolutionary trees. One area of current research in phylogenetic inference, and arguably one of the most challenging problems in evolutionary theory, is the early stages in the evolution of life. This quandary about the origins of different cell types provides a good illustration of the complications introduced by HGT into the reconstruction of evolutionary history.

The main early branches of the tree of life have been intensively studied by microbiologists because the first organisms were microrganisms. A gene very often used for constructing phylogenetic relationships in microorganisms is the small ribosomal subunit ribosomal RNA (SSU rRNA) gene, as its sequences tend to be conserved among members with close phylogenetic distances, yet it is variable enough that differences can be measured.[14] The use of SSU rRNA to measure evolutionary "distances" was pioneered by Carl Woese when formulating the first modern 'tree of life', and his results led him to propose the Archaea (single celled organisms superficially similar to bacteria) as a third domain (sub-kingdom) of life.

A three domain representation of the tree of life based on SSU rRNA sequences, showing the separation of Bacteria, Archaea, and Eukaryote domains. See Microorganisms article for further explanation

Microbiologists introduced the term domain for the three main early branches of the tree of life, where domain is a phylogenetic term very similar in meaning to biological kingdom. These represent the three main lineages in evolution of early cellular life, and are currently represented by the Bacteria, the Archaea and Eukarya (eukaryote) domains. Eukaryotes are all organisms with a well defined nucleus, and this domain comprises protists, fungi, and all organisms in the animal and plant kingdoms, including humans. As seen in the figure (left), studies of SSU rRNA genes (and some other genes) might suggest that Archaea and Eukarya have a sister relationship in evolution, and it has often been assumed that eukaryotes evolved from archaeal cells. However, the fact that genes can move between distant branches of the tree of life even at low probabilities poses problems for scientists trying to reconstruct evolution from studying genes and gene sequences in different organisms due to the scrambling effect of HGT. The challenges are most awkward for the ambitious reconstruction of the earliest branches of the tree of life - because over a long enough time and with large numbers of organisms, many HGT events are certain to have occurred even though each particular transfer event has a low probability.

Thus recent discoveries of 'rampant' HGT in microorganisms, and the detection of horizontal movement of genes for SSU rRNA have forced biologists to question the accuracy of at least the early branches in the tree of life, and even to question the validity of trees as useful models of microbial evolution.[15]

For more information, see Citizendium's article on Evolution of cells

The challenges of ascertaining an accurate branching structure for evolutionary trees of microbes, especially the earliest branches in the tree of life, have been a great spur for current biological research. Clear answers to important questions about these trees are not yet available, but many interesting discoveries and ideas are emerging.

Instead of relying primarily on a single gene such as the SSU rRNA gene to reconstruct evolution, scientific effort has now shifted to exploiting the comprehensive information from the many complete genome sequences of organisms that are now available.[16] So far, this comparative genomics approach, made possible by specially developed computer programs and mathematical algorithms, suggests that most of the core genes of bacteria that are useful for deducing evolutionary histories are unaffected by HGT. This confirms the practical experience of microbiologists that consistent and reliable trees can still be deduced for the more recent stages in microbial evolution, such as evolutionary relationships within particular bacterial phyla. This does require, however, using multiple, well chosen genes to investigate how lineages are related to one another. Thus the 'tree' is still a valid metaphor for microbial evolution - but a tree adorned with 'cobwebs' of horizontally transferred genes.

But it is also clear that trees based only on SSU rRNA alone do not capture the events of early eukaryote evolution accurately, and the origins of the first nucleated cells are still uncertain. For instance, careful analysis of the complete genome of the eukaryote yeast shows that many of its genes are more closely related to bacterial genes than they are to archaea, and it is now clear that archaea were not the simple progenitors of the eukaryotes. This discovery is a stark contradiction to earlier findings based on SSU rRNA and limited samples of other genes.[17] (See Evolution of cells for further discussion.)

On the other hand, the concept that rampant HGT took place in 'gene-swapping collectives' involved in metabolism and replication at the earliest stages of life's origins, before a postulated transition to Darwinian evolution of the cellular lineages known today, has been used by Carl Woese and colleagues to develop fresh insight into the origins of the universal genetic code.[18]