Henry Vaughan (1621—1695) was a 17th century Welsh writer, best known for his religious poems, which were produced within a short but intense period of creativity. He is commonly classed among the Metaphysical poets.

He was born at his mother's property of Newton, or Trenewydd, near to Scethrog, overlooking the river Usk, with its back to the Black Mountains, and he spent most of his life there. He was probably bilingual in Welsh and English, though his published writings were only in English and Latin.

His twin brother Thomas took a degree at Oxford University, which enabled him to become rector of Llansantffraid, their native parish; but Henry, although he too went to Oxford and studied law in London, does not appear to have acquired any qualification. His period in London was cut short by the Civil War, in which he and his brothers almost certainly fought on the royalist side. After that he remained at Newton, which he eventually inherited, and practised as a physician, though as far as is known he had no formal training, nor was he licensed. He married Catherine Wise, and, after her death, her sister Elizabeth, and had four children by each. Towards the end of his life he removed to Scethrog, leaving Newton to his son.

Thomas Vaughan, on being ejected from his living, moved to London, where he practised and published works on hermetic philosophy, and died in 1666.[1] Henry died on 23 April 1695. 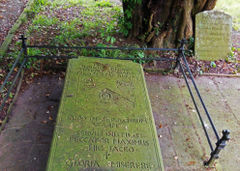 Aubrey described Henry Vaughan as "proud and humorous" (that is, capricious or moody). He fell out with his eldest son, and with a handicapped daughter. He was an ardent royalist and also a strong adherent of the Church of England, though his poem The true Christmas could have been written by an ascetic puritan. At some point he seems to have decided to publish only religious verse, but many years later produced another miscellaneous collection. Some of his stanzas contain a fairly conventional condemnation of his sins, in a general sense. Other verse implies some experience of religious ecstasy. His denominating himself as "Silurist" (inhabitant of the country of the Silures, a British tribe) is not the only way in which he displayed a strong attachment to his native countryside.

In 1646 Henry Vaughan published some capable but conventional and undistinguished poems together with a free translation of the tenth satire of Juvenal. Further secular poems and translations written after that were published in 1651, allegedly by A Friend, who claimed to have rescued them after they had been condemned by the author. These appeared under the title of Olor Iscanus (the swan of the Usk). Some of them contain compelling images, and the letters to friends display a witty humour. His preferred form in this selection was the heroic couplet.

Meanwhile he had published in 1650 Silex Scintillans (sparking flint), a collection of purely religious poetry. It is not known whether Wordsworth knew of Vaughan's poem The Retreate ("Happy those early days when I/Shone in my Angel-infancy") when he wrote his Ode Intimations of Immortality on much the same subject. Another poem, The World ("I saw Eternity the other night/Like a great ring of pure and endless light/All calm as it was bright"), is an extraordinary combination of visualisation, religious sentiment and satire. Silex Scintillans reappeared in 1655 with a preface attacking "the wits" and a second part added. It included two poems found in many anthologies, "They are all gone into the world of light", lamenting the deaths of friends; and The Night, in which Vaughan presents a semi-mystical picture of himself. In the preface he acknowledged the influence of George Herbert. The completed Silex Scintillans contains his best poetry, composed, it would appear, within half a dozen years.[2]

No further poetry was published until 1678, when Thalia Rediviva collected miscellaneous poems by both Henry and Thomas. This contained mostly old poems, including those he felt he could not publish before because they attacked the religious system of the Commonwealth.

Memory of Henry Vaughan's poetry dwindled away during the 18th century, even in Wales. Interest in his religious poetry began to revive in the 19th century, and it was noted that there was a resemblance between his poem The Retreat and Wordsworth's ode Intimations of Immortality, both of which imply the pre-existence of the soul, as was assumed among the hermeticists. A complete edition of the poetical works was first published in 1871. In the early 20th century he benefited from the critical esteem newly afforded to the metaphysical poets, and he acquired a certain following.