Helicobacter pylori is a spiral-shaped Gram-negative bacterium that infects the stomach. It can cause damage to stomach and duodenal tissue, which causes ulcers, gastritis (inflammation of the gastric mucosa of the stomach), and in some cases cancer. Robin Warren and Barry Marshall discovered the bacterium in 1982 and they were the first to culture it successfully. They purposed that it was H. pylori that caused stomach ulcers but this was not recognized at that time because people debated over whether the stomach environment would allow bacteria to survive. To prove their point, Marshall drank a Petri dish of H. pylori and he developed gastritis. The bacteria was isolated from the lining of his stomach and this proved three out of four of Koch's postulates (which establish the relationship between a microbe and a disease). Further investigations went on to determine the relationship between H. pylori and ulcers and numerous studies around the world confirmed this.

Warren and Marshall received the 2005 Nobel Prize in Physiology or Medicine for their work.

Helicobacter pylori contains one circular chromosome that carries 1,667,867 base pairs. It has about 1590 coding regions. The genome has been sequenced and it is being studied and compared to find out more about its lifestyle and pathogenicity.[1]

Helicobacter pylori is a slow growing helical-shaped Gram-negative bacterium with flagella.[2] It’s a microaerophilic bacterium, meaning that it requires oxygen at lower levels compared to the oxygen level in the atmosphere. It can use hydrogenase to obtain energy. Hydrogenase produces energy by oxidizing molecular hydrogen that is produced by the bacteria present in the intestine.[3]

Helicobacter pylori lives in the acidic environment of the stomach and duodenum where many other microorganisms would not survive. The flagella is used to drill through the mucus gel layer of the stomach. H. Pylori has been found to live inside the mucus gel layer, above epithelial cells, and inside vacuoles in the epithelial cells. Adhesins allow it to adhere to epithelial cells by attaching to membrane-bound lipids and carbohydrates. Other animals such as dogs, cats, and ferrets have also been infected by H. pylori. In the humans, infection leads to gastritis which if left untreated leads to the formation of ulcers. In the long run this can possibly cause gastric cancer.[4] 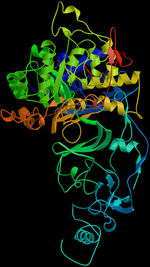 Helicobacter pylori is one of the most common bacterial infections in humans and it is present in almost half of the world population. One of the main reasons why it is able to infect its hosts is because it produces large amounts of urease enzyme. Urease breaks urea down into carbon dioxide and ammonia. The ammonia neutralizes the gastric acid that is present in the stomach and it is toxic to the epithelial cells. Due to the urease activity, H. pylori is able to tolerate the acidic environment; without urease it would die. Another reason why it is able to colonize is because the host immune system is unable to cross into the mucus lining. Initially in the presence of H. pylori, white blood cells, killer T-cells and infection fighting agents are sent to the site. But since they are unable to cross the mucus lining, the immune response just keeps growing and the immune cells end up dying at the location of the mounting immune response. The dead immune cells release cytotoxic agents, which is extra nutrients for the bacterial cells. This leads to gastritis and eventually ulcers. Most people will never have symptoms or problems related to the infection so it is hard to tell when someone gets the infection. But some symptoms can be loss of weight, loss of appetite, bloating, nausea, vomiting, and gnawing pain. But these symptoms may also be the result of other medical conditions so further tests would be required to confirm the presence of H. pylori.[5]

Most people who are infected with H. pylori don’t show any symptoms so you have rely on tests to confirm the presence of H. pylori. You can test noninvasively with a blood antibody test, stool antigen test, or a carbon urea breath test. A more reliable test is a biopsy check during endoscopy along with a rapid urease test, histological examination, and microbial culture. Infection can be symptomatic or asymptomatic, meaning that there aren’t any ill effects seen. It is estimated that about 70% of infections are asymptomatic and thus it is difficult to see who is infected with it.

Treatment for H. pylori starts with a procedure to eradicate the bacteria to allow for the ulcer to heal. Standard treatment is a one week triple therapy, this includes amoxicillin, clarithromycin and a proton pump inhibitor like omeprazole. Over the years a variation of triple therapy has been developed. A problem that has been found with antibiotic treatment is that an increasing number of patients are infected with antibiotic-resistant bacteria. In these cases the initial treatment fails and additional rounds of antibiotic or an alternative like quadruple therapy is needed.

"Helicobacter pylori eradication provided significant benefits to primary care patients with functional dyspepsia." according to a randomized controlled trial. [9] In this trial, the relative benefit ratio of Helicobacter pylori eradication for 50% reduction in symptoms at 12 months was 1.3 and, the relative benefit increase was 34.3%. In populations similar to those in this study which had a rate of benefit as measured by the 50% reduction in symptoms at 12 months of 36.5% without treatment, the number needed to treat is 8. [9]

In 2006 scientists found a membrane-imbedded protein in the stomach called decay-accelerating factor (DAF), which serves as a receptor for the bacteria Helicobacter pylori. Researchers wanted to know whether DAF also played a role in H. pylori adherence. To find out, the researchers measured the number of H. pylori that attached to cells that either expressed or did not express DAF. They found that the bacteria did adhere to cells with DAF. The researchers also found that H. pylori induced DAF expression in cultured gastric epithelial cells and rats that lacked DAF developed attenuated stomach inflammation. These results shed light on a possible new treatment for H. pylori. Drugs that interfere with DAF binding could be used to prevent or treat peptic ulcer disease.[10]

Currently the Blanke Laboratory at the university of Illinois is working on understanding mechanisms that allow pathogenic organisms to persist within the host during chronic infection and they are using H. pylori as a model organism. An emerging viewpoint is that this organism has co-evolved with their hosts over time and thus that is why it is able to adapt so well. Their research is focusing on the contributions of a bacterial toxin (VacA) produced by H. pylori that remodels the host environment to create a more suitable environment to colonize. Also they are trying to identify mechanisms by which H. pylori organisms are remodeled to become more adaptive to the stomach, this includes their capacity to sequester host cholesterol, and to change very rapidly to adapt to changes in the stomach environment.[11]

Although antibiotics have been useful in treating patients infected with H. pylori, there are few strains that have become antibiotic-resistant. A development of a vaccine would solve this problem and can also play a role in prevention. Recent studies have shed light on a possible vaccine developed through mucosal administration of purified recombinant sub-unit proteins of H. pylori and mucosal adjuvant. This has identified urease to be highly effective in prophylactic and therapeutic animal model studies. Further studies are in process.[12]