Admiral Gary Roughead became the 29th Chief of Naval Operations, the senior professional officer of the United States Navy, on 29 September 2007. He has commanded six operational units, both ships and larger sea commands. 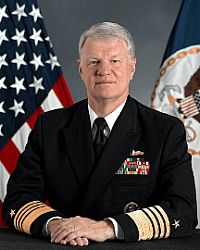 Recently, he was credited with cutting a Gordian knot in deployment of the experimental Zumwalt-class destroyers, billion-dollar large ships whose production was capped at three, in part because they lacked an area air defense system. The radar and electronics to give them such, planned for other classes, would not be ready for a year. Admiral Roughead ordered that the Zumwalt production be slowed for a year and a slight redesign made so they could accept the needed radar.

He is a 1973 graduate of the U.S. Naval Academy, who subsequently was its Commandant.

A surface warfare specialist, he was the first officer to command both types of ships with the AEGIS battle management system, the Burke-class destroyer USS Barry and the Ticonderoga-class cruiser USS Port Royal (CG-73). He has also commanded the USS George Washington carrier battle group and the U.S. Second Fleet/NATO Striking Fleet Atlantic. He also had the administrative job of commanding the Pacific Fleet.