Garrett Augustus Morgan, Sr., (1877-1963) was an African American inventor and businessman who is well-known for his protective breathing hood, a variety of hair-straightening and cosmetic preparations, and a type of traffic signal. He is renowned for a heroic rescue in which he used his safety hood to save workers trapped in a tunnel system under Lake Erie which had filled with noxious fumes. 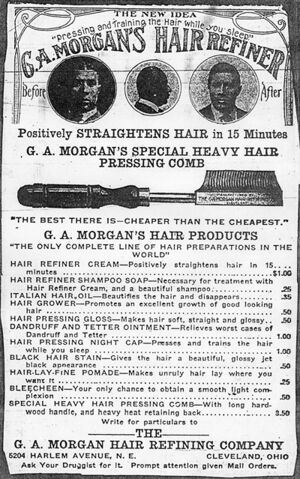 Garrett A. Morgan was born on March 4, 1877 in Paris, Kentucky to former slaves, Sydney Morgan and Elizabeth (Reed) Morgan, and seventh of eleven children. He spent his childhood attending school and working with his brothers and sisters on the family farm. When he was fourteen, he moved north to Cincinnati, Ohio, in search of employment.[1]

Morgan spent most of his teenage years working as a handyman for a wealthy Cincinnati landowner. Like many African-Americans of his day, Morgan had to quit school at a young age, in order to work. However, the teenaged Morgan hired his own tutor, and continued his studies while living in Cincinnati. As a teenager, he was inspired by Lewis Latimer.

In 1895, Morgan moved to Cleveland, Ohio, where he worked as a sewing machine repairman for a clothing manufacturer. He married Madge Nelson in 1896, and they divorced in 1898. News of his skill at fixing things and experimenting spread quickly throughout Cleveland.

In 1907, Morgan opened his own sewing machine and repair shop. It was the first of several businesses he would own. In 1909, he expanded his business to include a tailoring shop. The company made coats, suits, dresses, etc. - all sewn with equipment that Morgan himself had made. Morgan experimented with a liquid that gave a sewing machine needles a high polish and prevented the needle from scorching fabric, as it sewed. Accidentally, Morgan discovered that this liquid not only straightened fabric but also hair. He made the liquid into a cream and began the G.A. Morgan Hair Refining Company. Morgan also made a black hair oil dye and a curved-tooth Iron comb in 1910, to straighten hair.

In 1908, Morgan helped found the Cleveland Association of Colored Men. That same year, he married Mary Anne Hassek and together they had three sons.

In 1920, Morgan moved into the newspaper business when he established The Cleveland Call. As the years passed, he became a prosperous and widely respected business man, and he was able to purchase a home and an automobile. He is reported to have been the first African American in the Cleveland area to own an automobile.

Morgan's hair business thrived, and he used the profits from the operation to fund other inventions. Inspired by accounts of the Triangle Shirtwaist Fire, Morgan developed a passive respirator known as Morgan's American Safety Helmet. The safety helmet proved an enormous success, winning several prizes at international exhibitions. Morgan filed a patent application for this device on August 19, 1912. describing it as an apparatus which could "provide a portable attachment which will enable a fireman to enter a house filled with thick suffocating gasses and smoke and to breathe freely for some time therein, and thereby enable him to perform his duties of saving lives and valuables without danger to himself." Its mechanism was simple: the hood had two tubes which trailed down to the floor, where fresh air could be obtained (assuming that, as in a fire, the fumes to be avoided were warmer or lighter than air); there was no filtration of the air in his first models. A backpack-like air reservoir provided a small amount of unpressurized reserve air.

Morgan demonstrated the hood for numerous fire departments; in the South, he was forced to pose as an "Indian" assistant and hire a white man to pretend to be "Mr. Morgan" in order to sell his product in those Jim Crow times. A later model was marketed for use in World War I, but was not in fact the ancestor of the later, filter-based masks which eventually became a military standard. Mustard gas, alas, was heavier than air, and so Morgan's hood offered little protection against it. It was not, as some have implied, the first of its kind, nor was it the direct ancestor of the filtration-based masks of later years. 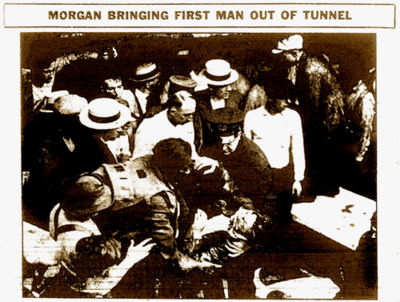 Nevertheless, Morgan's safety hood was a significant invention in the field of fire and disaster aid. It was to have its greatest, and most dramatic use in the great Lake Erie Crib Disaster. On July 25,1916, an explosion ripped through a tunnel in the construction "crib" five miles offshore and 200 feet under Lake Erie. More than a dozen men were trapped in the tunnel, which quickly filled with smoke and poisonous gases. Someone at the scene, having heard of Morgan's safety helmet, contacted him. Morgan, still in his pajamas and robe (it was around three in the morning), quickly summoned his brother Frank and a neighbor and rushed to the scene with Morgan hoods. Morgan tested the helmets at the scene, and realized that the pressure down in the tunnel might very well render them of little value, but descended anyway, accompanied by his brother Frank and a man with the (today notable) name of Tom Clancy. Entering the tunnel, the three men descended more then 200 feet into total darkness before finding one of the workers. They dragged him back to the surface and returned to find others. They made several trips until they had saved more than twenty lives. Due to racial prejudice, Morgan's name was not put forward by Cleveland officials for the Carnegie Medal for Heroism, which was awarded to several white men (Clancy among them) who had assisted with the rescue. Nonetheless, a committee of prominent Clevelanders honored Morgan for his bravery, awarding him a solid gold diamond-studded medal. The inscription read, "To Garrett A. Morgan, Our Most honored and Bravest Citizen."

It has often been claimed that Morgan invented the first "gas mask", however, the first practical gas mask was invented by Scottish chemist John Stenhouse in 1854. A precursor to the "gas mask" had been invented by Lewis Haslett in 1847 and granted US Patent #6529 in 1859. Numerous other inventors, including, Charles Anthony Deane (1823), John Tyndall (1871), Samuel Barton (1874), George Neally (1877), Henry Fleuss (1878), before Morgan's invention that was patented in 1914 (US Patent numbers 1090936 and 1113675), but does not diminish Morgan's heroism in using his mask to rescue the men trapped in the tunnel explosion, which was undertaken at great personal risk. In fact, because the Safety Hood was not especially well-suited to protect its wearer from the underground gasses in the Lake Erie explosion, Morgan may have suffered from exposure to them; late in life he blamed his health problems on this experience, and unsuccessfully pleaded with the City of Cleveland for compensation. 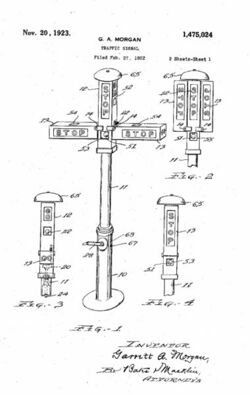 It was Morgan's experience while driving along the streets of Cleveland that led to his invention of his traffic signal.

The first American-made automobiles were introduced to U.S. consumers not long after the turn of the century. It was not uncommon for bicycles, animal-powered wagons and new gasoline-powered motor vehicles to share the same streets and roadways with pedestrians. According to tradition, it was after witnessing a collision between an automobile and a horse-drawn carriage that Morgan became convinced that something more needed be done to improve automobile safety.

The Morgan traffic signal was a T-shaped pole unit that featured three hand-cranked positions: Stop, Go and an all-directional stop position. This third position halted traffic in all directions to allow pedestrians to cross streets more safely. It was an improvement in some ways from earlier mechanical signals, but it was not by any means the first traffic signal. The first known traffic signal appeared in London in 1868 near the Houses of Parliament. Designed by JP Knight, it featured two semaphore arms and two gas lamps. The earliest electric traffic lights include Lester Wire's two-color version set up in Salt Lake City circa 1912, James Hoge's system (US patent #1,251,666) installed in Cleveland by the American Traffic Signal Company in 1914, and William Potts' 4-way red-yellow-green lights introduced in Detroit beginning in 1920. New York City traffic towers began flashing three-color signals also in 1920.

Despite widespread claims about its having been the first traffic signal, Garrett Morgan's cross-shaped, crank-operated semaphore was not among the earliest patented traffic signals, nor was it "automatic" as is sometimes claimed, nor did it play a significant part in the evolution of the modern elelctrical traffic light. Its one advantage over others of its type was the ability to operate it from a the side of the street using a mechanical linkage. Nevertheless it demonstrated Morgan's considerable ingenuity, and his continuing interest in inventions which would improve public safety.

Grave of Garrett A. Morgan

Although in ill-health, and nearly blind, he continued to work on his inventions; one of his last was a self-extinguishing cigarette, which employed a small plastic pellet filled with water, placed just before the filter. He sought treatment for his eye condition at the Mayo Clinic, and though this and other health problems limited his activity, continued to lobby the City of Cleveland for recognition of his services at the Lake Erie Crib Disaster. Letters survive in his papers in which Morgan, whose rental properties on Hough Avenue had been cited for housing violations, aksed for the City's understanding in giving him more time to correct these problems, in light of his service to the city and present ill-health. Whatever response the city made is not known.

At the Emancipation Centennial Celebration in Chicago, Illinois in August, 1963, Morgan was nationally recognized. Shortly before his death, in 1963, Morgan was awarded a citation for his traffic signal by the United States Government. In Prince George's County, Maryland, Garrett A. Morgan Boulevard and the adjacent Washington Metro's Morgan Boulevard Station are named in his honor. In 1991, the Division Avenue Water Works in Cleveland was renamed the Garrett Morgan Treatment Plant. Also in his honor is the Garrett A. Morgan Cleveland School of Science in Cleveland, Ohio.

Efforts by family members and others to secure belated recognition for his heroism from the administrators of the Carnegie Medal for Heroism have not met with success; the director of their awards committee has stated that they do not, as a matter of policy, revisit past awards.

Garrett A. Morgan, Sr. died on August 27, 1963, at the age of 86 and was buried at Lake View Cemetery in Cleveland, Ohio. The inscription on his gravestone reads "BY HIS DEEDS SHALL HE BE REMEMBERED," and includes a small illustration of his Traffic Signal.