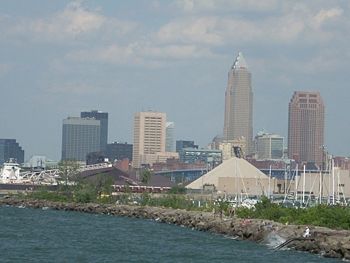 (CC) Photo: Eric Clevinger
A view of the Cleveland skyline from Edgewater Park

Cleveland is the second-largest city in the state of Ohio, with a population as of the 2000 Census of 478,403. In the late nineteenth and early twentieth centuries, Cleveland was one of the largest cities in the United States, and a major producer of steel, automobile parts, and other industrial goods, as well as the site of the headquarters of John D. Rockefeller's Standard Oil Company, at that time the largest oil company in the world. It has since declined in population, while at the same time its metropolitan area has grown; its metro area population of 2,250,871 makes it the largest in Ohio and the 23rd largest in the country. Cleveland is also the county seat of Cuyahoga County.

Cleveland was named after General Moses Cleaveland, who had been sent to what was then the Western Reserve of the state of Connecticut by the Connecticut Land Company in 1796. Surveyors working with Cleaveland laid out a survey of the city modelled after their home towns in Connecticut, with a large village green (later known as Public Square) at the center and long streets heading outward in geometrical lines; the major street surveyed, Euclid Avenue, was named for the Greek geometer Euclid. Cleaveland and his crew of surveyors departed after completing their work, never to return, and the area did not begin to be settled until several years later.

The first inhabitant of Cleveland (its spelling was simplified in in 1831) was Lorenzo Carter, who arrived in May of 1797 and built a cabin on the East Bank of the Cuyahoga River. Carter's cabin served as trading post, courthouse, and jail, as it was for some years the only structure in the area. Cleveland was incorporated as a village on December 23, 1814; by 1820 its population was still only about 600 people. The completion of the Ohio & Erie Canal in 1832, however, proved to be the start of a population boom; by 1850 the city claimed over 17,000 inhabitants, and nearly 50,000 people called Cuyahoga County home.