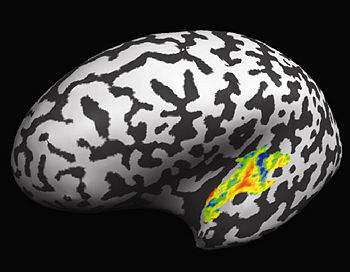 Functional magnetic resonance imaging (usually abbreviated fMRI[1]) is used to observe neural activity in the brain. This neuroimaging technique is based on the principle that neurons require blood to function, and so neural activity can be inferred or indirectly observed by tracking blood flow. FMRI machines produce images, or more accurately - functional images composed of voxels, containing neural activity of the brain based on this concept using magnetic properties of the blood. The signal being measured in an fMRI machine is called the BOLD signal.

It has been known since 1890 that the active areas of the brain use more blood than when they are inactive,[2] although it took until 1980 to develop a method of tracking this change.[3] Red blood cells contain hemoglobin, a protein which stores and transports oxygen throughout the body. Active neurons consume oxygen from hemoglobin for energy. Hemoglobin is oxygenated when it is carrying oxygen, and deoxygenated when is depleted. Oxyhemoglobin is paramagnetic, which means it slightly repels a magnetic field, while deoxyhemoglobin is diamagnetic, which means it is slightly magnetic. An fMRI machine is able to detect these changes in magnetic properties, and creates an image based on the blood-oxygen-level-dependent (BOLD) signal. 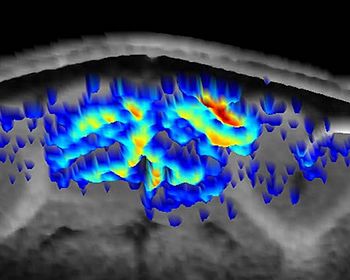 FMRI is primarily used to research the areas of the brain that are specialized for information processing. Studies have confirmed several previously known anatomically distinct areas in the visual cortex,[4] the motor cortex,[5] and language areas.[6] FMRI has been used for preoperative neurosurgery preparation, but is otherwise uncommon in a clinical setting. Some potential clinical applications are presymptomatic diagnosis, drug development, individualized therapy, and an understanding of functional brain disorders.[7]