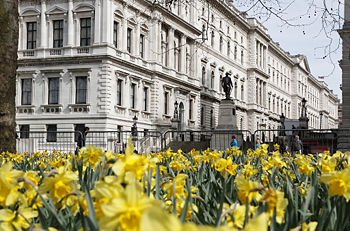 The Foreign and Commonwealth Office (FCO), formerly the Foreign Office and still often termed as such, is the United Kingdom's foreign ministry, responsible for the country's diplomatic relations with other nations. The FCO acts to represent and promote British interests overseas.[1]

The FCO is headed by the Foreign Secretary, a senior member of the Government of the United Kingdom, who occupies the highest position in the government after the Prime Minister and the Chancellor of the Exchequer. The current Foreign Secretary is Dominic Raab of the Conservative Party.

The FCO maintains one of the most prestigious UK government buildings, constructed over 1861-1868 in Italianate style; it was originally home to other government departments responsible for administering the British Empire at home and abroad.[2]