Flattop Mountain rises to 3,550 feet just above Anchorage, Alaska, where it is perhaps the most recognizable part of the natural skyline, along with Mount Susitna ("Sleeping Lady") and Mount McKinley (Denali). Flattop is among the westernmost peaks of the Chugach Mountains, which start at Anchorage and run east to the border with Canada. It is the most-climbed peak in the state, due to its proximity to Anchorage and relative ease of access. The mountain lies a little over 1,200 feet above and east of the very popular Glen Alps trailhead, above Blueberry Hill, and between the rugged glacier-carved valleys of Powerline Pass to the north and Rabbit Creek valley, which leads to Rabbit Lake, to the south.

One of the main reasons for the popularity of the hike to the top of Flattop is the stunning view of the entire peninsula that Anchorage rests on (called the "Anchorage bowl"). 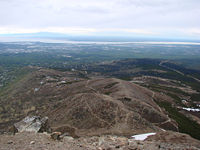 (CC) Photo: Rob Baird
View of Anchorage from Flattop.
The top of the mountain is actually flat for a considerable area, though sloping down slightly to the east. So it is easy for get-togethers, both planned and impromptu, to occur on Flattop, especially and famously on summer solstice. This day has a special significance in Alaska, since it is the longest day of the year, and, especially from a high point like Flattop, the sky never gets fully dark, even at 1 AM. The hike itself is fairly short (about three miles round trip) but moderately difficult, because of the steep elevation gain--and just before the peak itself, very steep indeed, with loose rocks and other hazards.

Most of the trail to Flattop and the mountain itself lie above the treeline, which is around 1,500 in the Chugach Mountains, and so a scenic alpine tundra, replete with colorful flowers, low-lying shrubs, moss, and lichen on rocks.