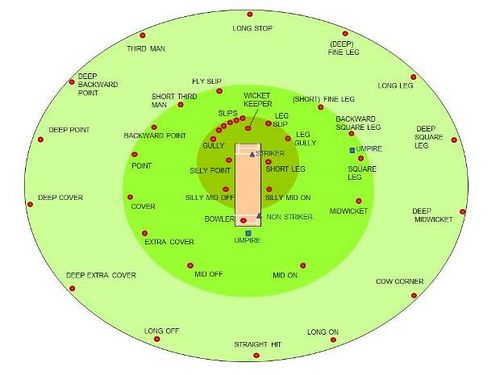 In the sport of cricket, one of the teams during play is known as the fielding side while their opponents are Batting. All eleven members of the fielding team are usually on the field throughout the innings with two batsmen and both of the two umpires. The fielding team are led and directed by their captain, who is responsible for all tactical decisions, though these are normally made after consultation with other team members, especially the bowler. The most common and most important decisions made by the captain are how to deploy his fielders around the field of play in order to assist the bowler in achieving dismissals of the batsmen and to restrict the batting team's scoring opportunities.

The cricket field is a large grassy area, normally some 150–160 yards in diameter. One of the fielders is the bowler and another is the wicket-keeper, a specialist who stands directly behind the wicket that the batsman on strike is defending. The batsman can hit the ball to any part of the field which means that the other nine fielders have a lot of ground to cover.

The numerous fielding positions are located as shown in the schematic diagram. Apart from the wicket-keeper and the bowler, all positions are optional and the other fielders are deployed tactically in any nine of the positions illustrated. The field in this diagram is for a right-handed batsman on strike (top end of the pitch in the centre). If a left-handed batsman is on strike, the positions are inverse to convert the diagram into a mirror image of itself. Close catching positions are within ten to fifteen yards of the striker in the inner circle with the darkest shading. Infield positions, intended to prevent the scoring of singles, are in the middle circle and these fielders are some thirty to forty yards from the striker. Outfield positions on or near the boundary are some sixty to seventy yards from the striker and are in the outer circle with the pale shading.

None of the positions are fixed, as the diagram might suggest, not even the wicket-keeper. All positions indicate a zone within which the fielder operates. The wicket-keeper's zone is a narrow strip, several yards long, directly behind the batsman's wicket while, for example, a fielder at "deep extra cover" patrols a zone of well over 100 square yards roughly bounded by "extra cover", "deep cover" and "long off".