Fibromyalgia is one of a variety of disorders categorized as chronic widespread pain by the American College of Rheumatology. "Muscle pain is typically aggravated by inactivity or exposure to cold. This condition is often associated with general symptoms, such as sleep disturbances, fatigue, stiffness, headaches, and occasionally depression. There is significant overlap between fibromyalgia and the chronic fatigue syndrome (fatigue syndrome, chronic). Fibromyalgia may arise as a primary or secondary disease process. It is most frequent in females aged 20 to 50 years." (From Adams et al., Principles of Neurology, 6th ed, p1494-95)".[1]

Multiple comorbid symptoms and syndromes may accompany fibromyalgia, including tension/migraine headache, affective disorders, temporomandibular joint disorder, idiopathic low back pain, irritable bowel syndrome, nondermatomal paresthesias, fatigue, memory and cognitive difficulties, and others. Comorbid tension headache is present in over 70% of women and 50% of men with fibromyalgia.

Once a diagnosis concerned, the next steps involve identification, in this highly individual disease, of important symptom domains, their severity, and level of patient function. The only diagnostic instrument that has been validated for measure of function and quality of life in fibromyalgia is the Fibromyalgia Impact Questionnaire (FIQ). Patients should be evaluated for comorbid medical and psychiatric disorders, psychosocial stressors, level of fitness, and barriers to treatment. Education should be provided and treatment options should be reviewed.

Fibromyalgia appears to have a multifactorial pathophysiology, which includes a strong familial predisposition, central pain amplification, psychiatric comorbid conditions, and other factors, such as immune dysregulation and the role of neurohormones such as dopamine, and growth hormone. Magnetic resonance imaging studies have provided objective evidence to show that patients with fibromyalgia have a lower threshold for pain sensitivity.[2]

Fibromyalgia is associated with alpha sleep.[5] However, it is unclear if this abnormal sleep pattern causes or follows fibromyalgia.

Fluid retention might be associated with fibromyalgia.[9][10] This is difficult to interpret as normal patients may have a 9 pound diurnal variation in weight.[11]

The ACR diagnostic criteria have accuracy of:[13]

A cohort study found that widespread pain significantly increased risk of subsequent diagnosis of cancer, especially breast cancer and prostate cancer.[14] The biological reason for this association is not clear.

Clinical practice guidelines by the European League Against Rheumatism (EULAR) recommendations (parentheses contain levels of evidence and strength of recommendation) are included below.[15]
General

Despite different modes of action, a variety of neuromodulatory agents may improve the symptoms of fibromyalgia patients. These include antidepressants, analgesics, anticonvulsants, muscle relaxants, and sedative hypnotic drugs. Only 2 drugs are FDA-approved for the specific treatment of fibromyalgia: pregabalin (Lyrica®) and duloxetine hydrochloride (Cymbalta®).[13]

According to the clinical practice guidelines:[15] 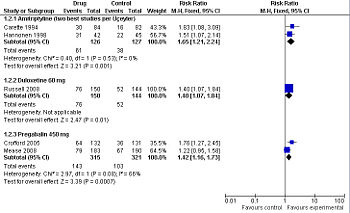 According to the clinical practice guidelines:[15]

Duloxetine (Cymbalta), a SNRI second-generation antidepressant, is approved for use in the United States by the Food and Drug Administration (FDA) for fibromyalgia. As compared to placebo, duloxetine 60 mg per day benefits about 1 of every 7 people who use it if they are similar to the patients in an randomized controlled trial. In this trial, 51% of the patients who took the drug had a 30% reduction in their pain versus 36% of the patients who took placebo (data not reported for 50% reduction).[26] This trial was sponsored by the makers of Cymbalta which increases the likelihood of publication bias towards positive results.

Milnacipran, a SNRI second-generation antidepressant is approved for use in the United States by the Food and Drug Administration (FDA) for fibromyalgia.[30]

Sodium oxybate may help according to a randomized controlled trial that was funded by industry.[31]