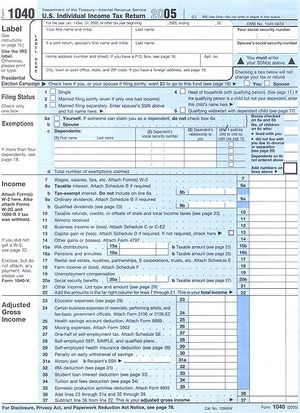 FairTax has been proposed as a simpler tax alternative to what some critics see as a convoluted and burdensome United States tax code. This is Form 1040 from 2005. Instructions for completing this form can be found among eighty thousand pages of tax rules.

The FairTax is a proposed change to the federal tax laws of the United States which proposes to replace all federal income taxes with a consumption–based tax paid only when new goods and services are bought. It is supported by a grassroots effort by citizens as well as members of Congress, political candidates such as Mike Huckabee and radio talk show hosts such as Neal Boortz and Jim Gearhart, and it is based on research by several economists. The plan has been introduced into the Congress as the Fair Tax Act and has been gaining adherents. It continues to cause considerable controversy between supporters and detractors.

The Fair Tax Act would replace all federal income taxes and remove the Internal Revenue Service three years after introduction, and establish an Excise Tax Bureau and a Sales Tax Bureau in the United States Department of the Treasury. State governments would have primary authority for the collection of sales tax revenues and forwarding them to the national Treasury.

The plan was created by Americans For Fair Taxation, a non-partisan advocacy group formed to change the tax system. The group states that, together with economists, it developed the plan and the name "Fair Tax", based on interviews, polls, and focus groups of the general public. Since the term "fair" is subjective, the name of the plan has been criticized as deceptive marketing by some, while being touted as true to its name by others.

The FairTax legislation was introduced by Representative John Linder (R-Georgia} and by Senator Saxby Chambliss (R-Georgia}. Linder has announced his retirement from Congress, but said he will spend more time speaking for the plan.[1]

Under the plan, personal income taxes (including the alternative minimum tax), corporate income taxes, capital gains taxes, payroll taxes (including Social Security and Medicare taxes), gift taxes, and estate taxes. would be replaced with a single broad national consumption tax on retail sales. Personal services such as health care, legal services, financial services, haircuts, and auto repairs would be subject to the FairTax, as would renting apartments and other real property. Exports and intermediate business transactions would not be taxed, nor would savings, investments, or education tuition expenses as they would be considered an investment (rather than final consumption). The tax would be paid when buying new goods and services for personal consumption; used goods would not be taxed. There would be a monthly payment to all family households of lawful U.S. residents as an advance rebate, or 'prebate', of tax on purchases up to the poverty level.[2] The initial sales tax rate, as defined in the legislation for the first year, is 23 percent of the total payment including the tax ($23 of every $100 spent in total—calculated similar to income taxes). According to one estimate, this would be equivalent to a 30 percent traditional U.S. sales tax ($23 on top of every $77 spent—$100 total).[3] The rate would then be automatically adjusted annually based on federal receipts in the previous fiscal year.

The tax would be levied once at the final retail sale for personal consumption on new goods and services. A good would be considered "used" and not taxable if a consumer already owns it before the FairTax takes effect or if the FairTax has been paid previously on the good, which may be different than the item being sold previously. Exports and intermediate business transactions would not be taxed, nor would savings, investments, or education tuition expenses as they would be considered an investment (rather than final consumption). Personal services such as health care, legal services, financial services, haircuts, and auto repairs would be subject to the FairTax, as would renting apartments and other real property. In comparison, the current system taxes income prior to purchasing such personal services. State sales taxes generally exempt certain goods and services in an effort to reduce the tax burden on low-income families. The FairTax would use a monthly "prebate" system instead of the common state exclusions. The FairTax would apply to Internet purchases and would tax retail international purchases (such as a boat or car) that are imported to the United States (collected by the U.S. Customs and Border Protection.)

Opponents of FairTax criticize this tax rebate due to its costs. Economists at the Beacon Hill Institute estimated the overall rebate cost to be $489 billion (assuming 100 percent participation). In addition, economist Bruce Bartlett has argued that the rebate would create a large opportunity for fraud, treats children disparately, and would constitute a welfare payment regardless of need.

The President's Advisory Panel for Federal Tax Reform cited the rebate as one of their chief concerns when analyzing their national sales tax, stating that it would be the largest entitlement program in American history, and contending that it would "make most American families dependent on monthly checks from the federal government". Estimated by the advisory panel at approximately $600 billion, "the Prebate program would cost more than all budgeted spending in 2006 on the Departments of Agriculture, Commerce, Defense, Education, Energy, Homeland Security, Housing and Urban Development, and Interior combined."[5] Proponents point out that income tax deductions, tax preferences, loopholes, credits, etc. under the current system was estimated at $945 billion by the United States Congress Joint Committee on Taxation. They argue this is $456 billion more than the FairTax "entitlement" (tax refund) would spend to cover each person's tax expenses up to the poverty level. In addition, it was estimated for 2005 that the Internal Revenue Service was already sending out $270 billion in refund checks.

Sales and income taxes behave differently due to differing definitions of tax base, which can make comparisons between the two confusing. Under an income tax formula, taxes to be paid are included in the base on which the tax rate is imposed (known as tax-inclusive). If an individual's gross income is $100 and the income tax rate is 23 percent, taxes owed equals $23. Traditional state sales taxes are imposed on a tax base equal to the pre-tax portion of a good's price (known as tax-exclusive). A good priced at $77 with a 30 percent sales tax rate yields $23 in taxes owed. To adjust an inclusive rate to an exclusive rate, divide the given rate by one minus that rate (i.e.

The FairTax statutory rate, unlike most U.S. state-level sales taxes, is presented on a tax base that includes the amount of FairTax paid. For example, a final after-tax price of $100 includes $23 of taxes. Although no such requirement is included in the text of the legislation, Congressman John Linder has stated that the FairTax would be implemented as an inclusive tax, which would include the tax in the retail price, not added on at checkout—an item on the shelf for five dollars would be five dollars total. The legislation requires the receipt to display the tax as 23 percent of the total. Linder states the FairTax is presented as a 23 percent tax rate for easy comparison to income tax rates (the taxes it would be replacing). The plan's opponents call the semantics deceptive. FactCheck called the presentation misleading, saying that it hides the real truth of the tax rate. Bruce Bartlett stated that polls show tax reform support is extremely sensitive to the proposed rate,[6] and called the presentation confusing and deceptive based on the conventional method of calculating sales taxes.[7] Proponents believe it is both inaccurate and misleading to say that an income tax is 23 percent and the FairTax is 30 percent as it implies that the sales tax burden is higher.

A key question surrounding the FairTax is whether the tax has the ability to be revenue-neutral; that is, whether the tax would result in an increase or reduction in overall federal tax revenues. Economists, advisory groups, and political advocacy groups disagree about the tax rate required for the FairTax to be truly revenue-neutral. Various analysts use different assumptions, time-frames, and methods resulting in dramatically different tax rates making direct comparison among the studies difficult. The choice between static or dynamic scoring further complicates any estimate of revenue-neutral rates.