The F-15 Eagle aircraft is a series of air superiority fighters, designed for the United States Air Force. Production began with the F-15A single-seat and F-15B two-seat (trainer) versions; the current U.S. production versions are the F-15C and F-15D. In the system of fighter generations, it is usually considered fourth generation, with the best available human interfaces, such as HOTAS controls from the beginning. 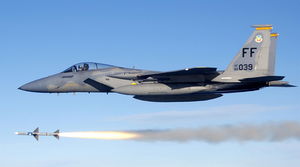 While an informal motto for the designers was "not a pound for air to ground", a two-seat fighter-bomber variant, the F-15E Strike Eagle, has proved to be a formidable combat performer.

Both the F-15 and F-15E will be replaced by the fifth generation F-22 Raptor. As the F-16 Fighting Falcon complements the F-15, the F-35A Lightning II will complement the F-22. For the United States, the successor to the F-15 air superiority and probably advanced fighter bomber series is the F-22 Raptor, although Secretary of Defense Robert Gates has recommended stopping production after 187 airframes. The F-35 Joint Strike Fighter, which will continue and perhaps increase production, still has substantial air-to-air capability, and might well outperform an Eagle but not a Raptor. Upgraded Eagles, however, have been proposed for the export market, such as the Boeing-developed F-15SE Silent Eagle.[1]

Eventually, the F-15 airframes will wear out. While the aircraft still can fly, however, its avionics continue to be upgraded. If the NCADE missile, in active testing as an air-launched anti-ballistic missile, with other long-range intercept roles, this might provide a role for F-15's that are not adequate against first-line fighters.

Before the F-15E was developed, the F-15 series was seen as a "high end" air superiority fighter. Under John Boyd's concept of "high-low", the F-16 Fighting Falcon was the Air Force low end, intended as a fighter-bomber although having significant air superiority capability.

The first F-15A flight was made in July 1972, and the first flight of the two-seat F-15B (formerly TF-15A) trainer was made in July 1973. The first Eagle (F-15B) was delivered in November 1974. F-15s can extend their range both with aerodynamically efficient conformal fuel tanks that effectively become part of the fuselage, as well as wing-mounted drop tanks. Still, they routinely use air refueling.

In January 1976, the first Eagle destined for a combat squadron was delivered. In 1983, a Multistage Improvement Program was begun, with the first production MSIP F-15C produced in 1985. Improvements included an upgraded central computer; a Programmable Armament Control Set, allowing for advanced versions of the AIM-7 Sparrow (now obsolete), AIM-9 Sidewinder, and AIM-120 AMRAAM air-to-air missiles; and an expanded Tactical Electronic Warfare System that provides improvements to the AN/ALR-56C radar warning receiver and AN/ALQ-135 countermeasure set.

The final 43 included a AN/APG-63 radar, of which Version 1 is a PESA system. APG-63 V(3), now operational, is a second-generation active array (AESA) system. The V(2) was the world's first operational fighter AESA.

F-15C, D and E models were deployed to the Persian Gulf in 1991 in support of Operation DESERT STORM where they proved their superior combat capability. F-15C fighters accounted for 34 of the 37 Air Force air-to-air victories, as well as victories by the Royal Saudi Air Force. They have since been deployed for air expeditionary force deployments and Operation NORTHERN WATCH andOperation SOUTHERN WATCH (no-fly zones in Iraq), Operation Provide Comfort in Turkey, Operation Allied Force in Bosnia, Operation Enduring Freedom in Afghanistan and Operation Iraqi Freedom in Iraq.

There are a number of foreign operators, including Israel, Japan, and Saudi Arabia, with variants specific to national needs and U.S. export controls.

For both electronic protection and infrared countermeasures, the AN/ALE-47 Countermeasures Dispenser System [CMDS], is a "smart" dispenser that can integrate with defensive avionics such as radar warning receivers, radar reflector (i.e., chaff) dispensers, radar jammers, as well as helping the pilot with situational awareness of the threat. [2] The AN/ALQ-184 is an active jammer attached to the aircraft, and can also tow older decoys.